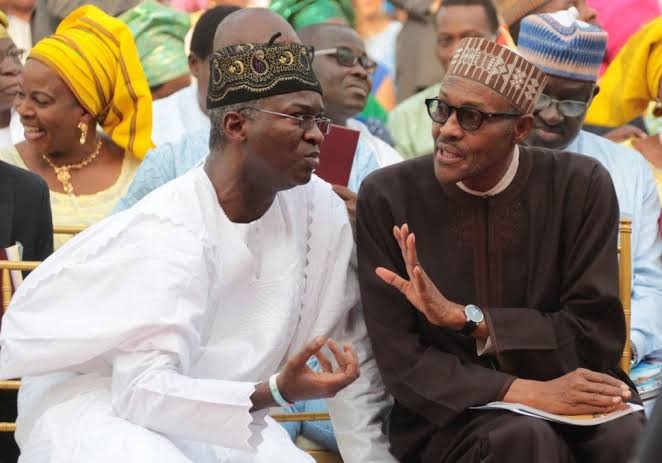 After spending over 46,824 hours in office as the 15th Nigerian Head of State without tangible achievements to show for it, Minister of Works and Housing, Babatunde Fashola, has besmeared the image of Nigerian President, Major General Muhamadu Buhari (retd.), with the mishmash colours of green, white, grime and deceit.

I’ll confess. Fashola never set out to disfigure the President. He actually set out to drape the threadbare Buhari government in brilliant paints, but somewhere along the line, Fashola stepped on gloss and tripped, inadvertently dipping the canvas bearing Buhari’s image in a smorgasbord of riotous colours.

Thus a bespattered Buhari image emerged with red lips, purple head, green torso and blue limbs – in the eyes of millions of Nigerians who are daily whacked by hunger and stricken by diseases, withering and falling off to death like brown leaves falling off iroko tree.

Verily, verily, I say, Nigerians living below the poverty line won’t look at Fashola with kind eyes, aka ‘oju ire’, for the interview he granted last week to celebrate Nigeria’s 60th independence anniversary.

Eni ba ma je ogun k’ogun, o gbodo pa itan k’itan is a Yoruba proverb that warns against the antics of the undeserving, laying false claims to unmerited inheritance. Fashola really put up a keen effort to paint the Buhari regime in bright colours but his bucket of white paint fell flat on hot tar.

Exactly one year ago, an unpalatable index on the World Poverty Clock gave credence to the wracking poverty in the land, saying 94 million Nigerians spend less than $1 each per day and live below the poverty line. With the stagnating unitary system of government tenaciously run by the country and the ruinous coronavirus pandemic, the number of Nigerians living below the poverty line must have shot beyond the sky by now.

Nigerians who fall into this starving category can confirm that when hunger sits in the pit of the stomach, nothing else can enter, except food. Anger is the monster in a hungry man.

In the story published in The PUNCH on October 1, 2020, Fashola said Nigerians are disappointed in the Buhari regime because they lack a proper understanding of the functions of government at different levels. Insult upon injury!

The PUNCH report quoted Fashola as saying, “The government that can transform and give us what we want quickly are the governments closest to us – state and local governments.

“Looking for the Federal Government or a magic President is why we seem to have been disappointed. We’re looking for the results in the wrong place.”

Expatiating, Fashola said that basic infrastructure like primary healthcare, primary education, among others being agitated for by many Nigerians, are the responsibilities of state and local governments.

Fashola, a silk, is dead right and I agree with him.

But the over 94 million Nigerians daily threatened by starvation are grumbling and insisting that their tears of poverty haven’t blinded them from seeing the truth and asking, “Are state governments responsible for the billions-of-naira-gulping white elephant called Aso Rock Clinic? Are state governments responsible for federal universities, polytechnics, colleges of education and secondary schools, where maggots swim in toilets, bedbugs snuggle under duvets and electricity lies in the belly of darkness.

Ensconced within the high walls of his palatial residence in Abuja, the murmuration of Nigeria’s 94 million suffering heads can’t reach up to Fashola on his high horse, but I’ll help them amplify it, though I’m fully in support of Fashola in his intolerance of the masses’ stupidity.

With refreshed nowness, I can hear the 94 million rejects of the scorched Nigerian earth recalling that this isn’t the first time left-handed Fashola would viciously pull the ears of the Nigerian masses and ram down his knuckles on their fungi-ravaged head.

To properly situate Fashola’s indignation of the Nigerian masses, the 94 million poverty population looked back in time and paused at the December of 2018 when Fashola, defending the underachievement of Buhari in the power sector, said, “There are problems, without a doubt, and we must deal with them. But let me remind you, all of the assets that the Ministry of Power used to control were sold by the last administration before I came. And so if you don’t have power, it’s not the government’s problem. Let’s be honest.”

Fashola didn’t shut up. He spoke further, “The people who are operating the power sector, generation and distribution are now privately owned companies. I’m here because I’m concerned. If your telephone is not working, it’s not the minister of telecommunication that you go to. Let’s be clear.”

Nigeria’s 94 million suffer-heads won’t let Fashola the philosopher king be. They mutter and accuse him of also opening his mouth in November 2019 to say Nigerian roads weren’t as bad as they were being portrayed by Nigerians.

The latest lecture on the functions of government is the third consecutive year when the masses will be lacerated by the sharp tongue of Fashola, who as two-term Lagos governor, inscribed signs along horrible federal roads, saying, “This is a Federal Government road, please, bear with us,” to mock the Peoples Democratic Party-led FG when his All Progressives Congress administration rehabilitated some federal roads in Lagos.

Aside from the referenced story of Fashola in The PUNCH of October 1, 2020, the elated minister also granted an exclusive video interview to News Central TV to celebrate Nigeria’s pyrrhic independence.

In the interview, Fashola spoke about the need for Nigeria to continue to exist TOGETHER as one indivisible entity, the aspirations and duties of the Nigerian youth, the ‘enviable’ level of Nigeria’s infrastructure and his Sugar Candy Mountain dream about Nigeria’s future.

Despite ruling for more than five years in office, Fashola, in the video interview, couldn’t mention ONE tangible achievement of Buhari, but tried to teach Nigerians what they can do for their country, and not what the country can do for them.

If the interview was to project Fashola as a brilliant technocrat and position him ahead of 2023, it failed disastrously as his responses not only contained grammatical blunders, it also was an untrue assessment of the socio-political temperature of the country.

Blandly stating the obvious, Fashola said in the video interview, “I think the thing that is true is that our economy and our population has (sic) grown faster than the rate of deployment of the infrastructure,” while he enjoined the youths in these words, “You don’t need a title to serve, there are so many little little things everybody can do, in his community, in his home, his family that adds (sic) up…Life itself and progress is (sic) a very dynamic and continuing effort.”

Dubiously, all the mouthed projects of the Buhari government listed by Fashola as ongoing infrastructural works are in the pipeline, not one has been completed. These include five competitive 21st Century type airport terminal buildings, road network, rail network; Lagos-Kano rail, Ilorin-Abuja rail, Lagos-Ibadan rail and an increased broadband connectivity that will ‘link the last man’ and all Nigerian villages. Let someone shout, “H-a-l-l-e-l-u-y-a-h!”

Despite all these undelivered heaven-on-earth promises, an all-knowing Fashola still has the audacity to lecture Nigerians on how to use his word-of-mouth infrastructure, tasking Nigerians to use his unseen infrastructure with a sense of duty.

By telling Nigerians to place their expectations for electoral deliverables on state and local governments, Fashola underscores the deafening call for restructuring. But need I whisper to him that, ‘President Buhari mustn’t hear such a heresy!’

In the ecstasy of Nigeria’s diamond jubilee, Fashola says, “I see that future already in my mind’s eye.” I see no future but farce. If Buhari had put his hands to the plough since May 29, 2015, Nigeria should be singing Bob Marley’s ‘One Love’ today, but Eedris Abdulkareem’s ‘Nigeria Jagajaga’ is what I hear.

There’s a natural mystic blowing through the air.