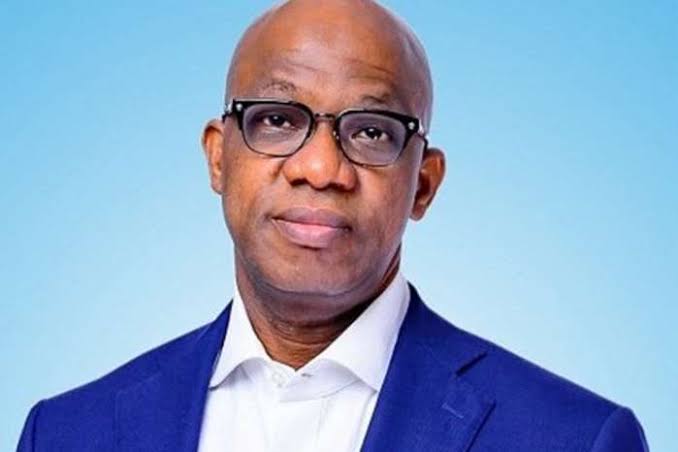 Arguably a line crosser and a barrier breaker, Governor Dapo Abiodun has bagged another award as the Governor of the year 2020.

The ever working Number one citizen of Ogun State received the prestigious award as Governor of the Year 2020 from the Nigeria Agriculture Awards, NAA in Abuja yesterday..

We reliably gathered that for his landmark achievements in the major sectors in the state amidst all limitations, he won the awards. It would be recalled that he also won the best Governor on education in Nigeria recently.. The award was organised by the National Parents Teachers Association

Prince Adedapo Oluseun Abiodun, MFR, Governor of Ogun State, Nigeria, was born on Sunday, 29th May, 1960 into the family of Dr. Emmanuel and Mrs. Victoria Abiodun of Iperu-Remo, in Ikenne Local Government of Ogun State. Both parents are teachers. He attended Christ’s School Ado Ekiti in 1972, St. Joseph’s College, Ondo in 1977, and later Ondo High School, in 1978. His education followed the movement pattern of his parents who served in different parts of the then Western Region. Dapo Abiodun proceeded to the prestigious University of Ife (now Obafemi Awolowo University), Ile-Ife, Osun State, where he studied Civil Engineering but later transferred to the Kennesaw State University in Atlanta, Georgia, United States where he graduated with a BBA in Accounting in 1986. Dapo began his career with Glock Inc. USA as Cost Accountant and worked between 1989-1991. Thereafter, his passion for the motherland made him return to Nigeria and he immediately embarked on an entrepreneurship voyage. He founded a number of successful businesses. Until his assumption of office as Governor of Ogun State in May, 2019, he was Chairman and / or

Chief Executive of several reputable companies which included Crestar Hydrocarbons Limited, OMS-Heyden Exploration and Production Limited, Heyden Petroleum Limited, Alarmnet and Innovative Ventures Limited, and First Power Limited. As a result of his vast wealth of experience in boardroom activities, corporate governance and finance, Prince Abiodun became a regular face at Board Meetings of several blue-chip companies. His experience transcends the private sector. He also served as a member of various Presidential Committees like the Presidential Think Tank set up by President Olusegun Obasanjo in 2001. He was appointed Chairman, Oil and Gas Committee of Ogun State in 2009 and served as Chairman of Depot and Petroleum Product Marketers Association (DAPPMA) from 2012 till 2019. Prince Abiodun, in 2018, was appointed Chairman of Corporate Affairs Commission (CAC) by President Muhammadu Buhari and led a number of reform initiatives that standardized and improved the business registration process in the country, leading to a higher ease-of-doing-business ranking for the country. In 2014, he was honoured by President Goodluck Ebele Jonathan with the prestigious National Award of Member of the Order of the Federal Republic of Nigeria (MFR).

In 2018, he was awarded a Doctor of Science in Business Development and Administration (Honoris Causa) Degree by the Adeleke University, Ede, Osun State and another Doctor of Finance (Honoris Causa) Degree by the Ekiti State University, Ado-Ekiti, in recognition of his significant positive impacts and immense contributions to the development of the nation and humanity.

On his return from the U.S.A and in line with his commitment to the development of the State, and love for his people, he contested and won the Ogun East Senatorial seat way back in 1998 on the platform of the defunct United Nigeria Congress Party, emerging as the youngest senator-elect in the country. The victory was, however, truncated by political developments in the country that aborted the Third Republic and the assumption of office of the elected political office holders.

He later joined the Peoples Democratic Party in 1999 as a founding member on which platform he contested in the primaries for the governorship ticket in Ogun State in 2002. He emerged as the runner-up to the winner of the ticket, who eventually became the winner at the general elections.

Undaunted, he threw himself into the Ogun East Senatorial race as the flagbearer of the All Progressive Congress (APC) in 2015 losing narrowly to the winner. Whilst his previous political journey might have been a mixed bag, his love for his people, commitment to serve them and passion for the development of Ogun State never waned. Therefore, in 2018, he made a comeback and contested for and won the governorship ticket of the APC in Ogun State in what was arguably the most celebrated governorship contest in the 2019 general elections.

His message of Building our Future Together resonated and was well received across the State and energized the people resulting in a resounding victory at the 2019 polls, thus emerging as the 5th elected