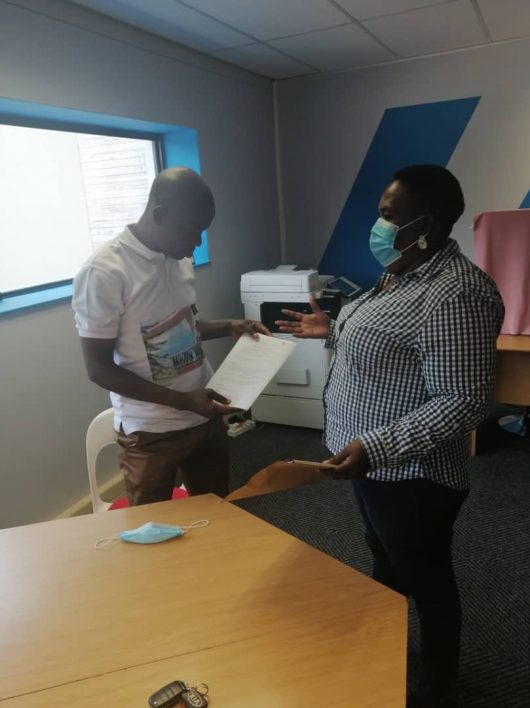 IAJ has been equipping thousands of journalists across the continent of Africa! In a very recent development – IAJ is set again to increase its milage in the world’s most populous black country – NIGERIA.Demonstrated through series of social media messages and pictures released by Adeniyi IFETAYO – the Publisher of Megastar Magazine; Senior Correspondent at BEN TV London, IAJ is consummating an ‘International Journalist Training Partnership and Professional Collaboration’ via an ‘MOU’ with Nigeria’s award-winning celebrity journalist – Adeniyi Ifetayo Moses.

Handing over the Memorandum of Understanding (MOU), the Project Coordinator – Dimakatso Mathe expressed deep belief that Africa is indeed set for another journalism boost through this fete with the 28year old institution – ‘IAJ’!Recently at the institute’s headquarters in Johannesburg, South Africa -Niyi (as he’s fondly called by his numerous clients and admirers) was commissioned to promote the institution in Nigeria and coordinate the activities of other journalists, writers and communications experts who will like to sharpen their skills in journalism by exploring new strategies in Media, Publications and Journalism at the Institute for Advancement of Journalism in South Africa.

According to the 1st Secretary – Political of the South African Embassy Abuja – Boipelo Lefatshe, aside other undisclosed commitments of the collaboration – the bilateral relationship between the two biggest economies in Africa would definitely culminate into a unique professional integration of the two nations so soon. Through ‘SMS’ – Lefotshe said – ‘the MOU is a great news which will entrench deeper cooperation in the educational sectors of the two countries respectively. She also affirm that ‘both the beneficiaries and benefactors of this journalistic initiative would definitely be better for it very soon’!