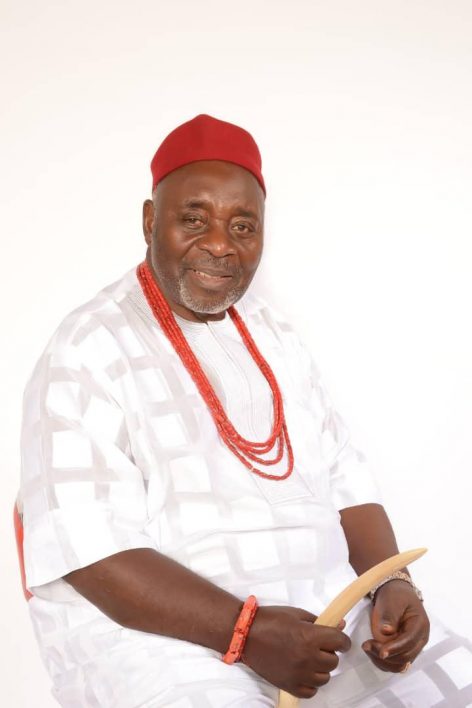 Chief Emmanuel Umeohia, the Chairman and Chief Executive Officer, Emab Plaza, has advised political parties to zone the presidency to south East in 2023 for the sake of fairness and equity as well as to achieve oneness in the country.

· He said this in an interview with the Sun Newspapers recently in hometown, Amichi, Nnewi South , Anambra state to commemorate his 70th birthday. The octogenarian who used the occasion to bare his mind on the state of the nation, insecurity and his journey so far, also proffered solution on the way forward for Nigeria.

My names is Chief, Sir Emmanuel Chukwunweike Umeohia, OON, KSC (Ide Okpara Amichi) also known as Agu Emab. I am the first son of the eleven children of my parents, Mr. Edwin and Mrs. Janet Umeohia of the blessed memory.

My parents had ten sons and one daughter. We are natives of Ebenato Okpara Village, Amichi; in Nnewi South L.G.A., Anambra State. I was born on the 16th of April 1951 and I attended St. Andrew’s Anglican Primary School, Amichi. I am married to Chief, Lady Angelina Uchenna Umeohia and we are blessed with four daughters and three sons.

I began my adventure into business early in life. During the Nigerian civil war, I was into the Palm Produce business, dealing on Palm Oil and Palm Kernels. I continued with these until the end of the war.

After the civil war in 1970, I came to Lagos and since most of my people in Lagos were into the Textile business, I followed the same line. I rented an “Ipate”, that is a little space beside a shop. From there, I was able to progress and rented a bigger shop. Thereafter, I began to travel to Aba, the present commercial city of Abia State, to do bulk purchases of goods from Textile Merchants from Abriba and Ohafia, for a resale in Lagos.

In process of time, I began to travel abroad to places like Indonesia, Hong Kong, South Korea, Germany as well as the United States of America, to import these goods by myself. From these efforts, I was able to raise enough funds to diversify into my present business of Real Estate Development. Now, I build both commercial and residential real estates. I also purchase large chunks of land for property developments and resell.

How long have you been in business?

I can vividly say I have been in business for approximately fifty one years. God, indeed, has all along been my helper.

How do you feel being 70 and how has the journey been so far?

I feel really excited and very appreciative to God Almighty for sparing my life and making me reach the landmark age of 70 years. It is by His grace that I am alive today and have become who I am. I give Him all the glory.

Can you go memory lane on your childhood days?

Growing up was quite interesting and exciting. My siblings and I had very good and hardworking parents, who nurtured and trained us to live in conformity with our societal norms and values. They gave us very good moral upbringing. They took us to Church and taught us to trust God and love our neighbours.

They gave us exposure into early primary education as well as inducted us into business. As a primary school boy, I became exposed to what we now call the Poultry Farm. I reared many domestic animals of my own. Especially, goats and chickens. I fend green herbs for my goats and developed livestock feeds for my chickens, using a mixture of maize and palm kernels.

I so took good care of my chickens to the extent that they know me and as well became acquainted with my voice. Each time I came back from school, my Agric chickens would cluster around me, knowing they would have something to eat. I collected so much eggs from them weekly and sold same, having enough money for my up keeps in school as well as to share refreshments with my friends.

How was life then and now?

A. Life, I can say was better then than now. People lived peacefully, the crime rate was low. Truth prevailed. There were little or no armed robberies and bloodshed was rear. Then you could sleep with your two eyes closed without any fear of intimidation, unlike what obtains today.

Is there anything you wish you would have done differently if you were younger?

Of course yes. You know, lost opportunities are not easily recovered. I had the opportunity to acquire whatever level of education I had wanted, but I did not exploit it. If I were younger today I would not fail to grab such. There were other opportunities I had lost both in business and other spheres of endeavors, owing to inexperience as well as trying to be extra careful. Nevertheless, I thank God for where I am today.

Can you recall any memorable experience or event in your life?

The most harrowing experience I ever had in my life was when two container loads of my goods were seized by the Nigerian Customs Department. I had travelled abroad, bought these textile wares and shipped same to the country. Before the arrival of the goods, government policy changed. Importation of Textile wares were placed under prohibition. Thus, on arrival, the goods became classified as contra banned and were seized.

That singular occurrence gave me days of sleepless nights as well as a very great concern. It gave my business a huge set back. It was by God’s special grace that I overcame and survived it.

Looking back, do you have any regret in any sphere of your life?

As I said earlier, there were opportunities that slipped out of my hands. I now wish I could bring them back. Nevertheless, I thank God for where He has brought me thus far. I am grateful for the opportunities I was able to make good use of, by His grace.

Is there anything that life has taught you?

Over the years, I have learned to be honest in my dealings with people. I have learned not to cheat anyone or appropriate to myself what does not belong to me. I do not hold back what belongs to others, I always discharge my commitments to people as at when due. I have also learned that it is not good to subvert or cover up the truth.

Do you have any Foundation or NGO that caters for the less privileged in our society as a means to show appreciation to God and humanity?

Yes, we have the Emab Foundation, through which we reach out to the vulnerable and less-privileged in society.

For over 30 years now, we have been doing our best to assuage the sufferings of our people.

We have a scholarship scheme for indigent students at various levels of education. We empower our jobless young men with tricycles to fend their living. We give financial grants to struggling men and women in our community to either resuscitate their businesses or as start up capitals.

Each month of December, during Christmas season, we give out bags of rice, Tin tomatoes and kegs of vegetable oil to households in our community, to celebrate Christmas.

Ten years ago, when I celebrated my 60th Birthday, we built a minimum of six bedroom, 6 numbers of bungalow houses for needy families in our community.

This year again, as I celebrate my 70th Birthday, we have built another set of 7 numbers bungalow houses fully equipped with power generating sets for some other needy families. If God permits, we shall also at age 80, by His grace, do more.

How do you see the state of the nation?

Although things may not be as good as we all envisage, I think the government of the day is doing the best it can to move the country forward. We are praying and believing that by God’s grace, things would be better.

Are you disturbed by the insecurity in the country?

I am not a politician and I do not want to dabble into politics. Nevertheless, like every right thinking person, the spate of insecurities pervading the country at present, more so, in a given area of our society; is a matter for great concern.