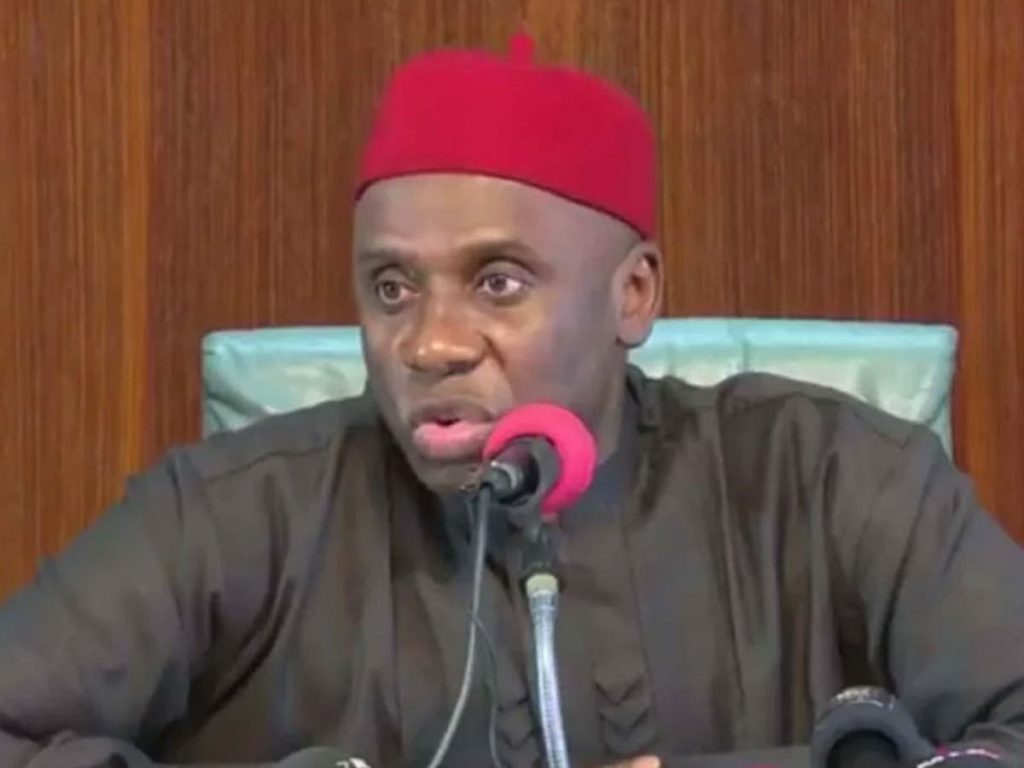 Minister of Transportation, Rotimi Amaechi, has come under serious criticism in recent times due to his charge to members of the National Assembly not to probe the propitiousness or otherwise of the $500 billion from China to construct the Lagos Ibadan railway.
The minister who was visibly angry while appearing before the the House of Representatives Committee on Treaties and Agreements committee on Tuesday, last week, asked the lawmakers to suspend their probe until Nigeria has secured the loan.
The former Rivers state governor said except the government secures the loan some sections of the country’s rail lines “will suffer.”
“I have said here to the house, and it is a pity that I’m saying it in public, this government, outside Nigeria, they are sensitive to what you say. Nobody is stopping you from your investigation and no government from outside Nigeria can stop you from doing it,” he said.
Prior to the probe, chairman of the committee, Nicholas Ossai, had disclosed that there are clauses conceding Nigeria’s sovereignty to China in some of the loan agreements.
Apart from worries over the implications of the loans bound to became a serious burden for future generations, the perspective of ceding the national sovereignty has raised many concerns.

In what can best be described as Amaechi’s attempts to persuade Nigerians to accept the Chinese loan, the minister showed up on a national television program on Friday, to speak to the issues raised at the National Assembly.
But in what appears to be a twist of fate, the minister plunged into another complicated issues when he alluded that the nation’s maritime now ranks number one in terms of insecurity.
Answering questions during the program, the minister stated that the Secure Anchorage Area (SAA) contract being operated by Ocean Marine Security Limited (OMSL) in full collaboration with the Nigerian Navy in Lagos is “laced with fraud”.
Amaechi further disclosed that the Chairman of OMSL, Captain Well Hosa Okunbo, did not have the approval of the Federal Government to operate the so-called secure anchorage area.
Casting aspersions on the program, he said, “What security was he providing? He charges each vessel on the waters $2,500, then after that $1,500 everyday. He doesn’t pay back that money to the Federal Government.
“He makes $17million from that activity. Who approved it? Nobody! So as Minister for Transport, I said no, we can provide that security. $195 million was approved by the Federal Government to a company that is training Nigerians that will take over the waterways, and take care of the security, then Okunbo is now saying no no, I must do it, he can’t. I wonder why our personal interest will override national interest. I wonder what kind of country we belong to,” Amaechi said.
The Minister challenged the OMSL chairman to come forward with the approval letter he got from the Federal Government to provide maritime security on the nation’s waterways.
“If you said Captain Hosa was doing it, how come we are currently ranked number one in the world in terms of insecurity in the maritime sector. When we came, we were number three, but now we are number one in the world.
“Now the second aspect beyond ranking number one in the world in insecurity is the fact that we are notorious as a country in the whole of Gulf of Guinea; 80 per cent of the crimes in the Gulf of Guinea is committed in Nigerian waters,” Amaechi said.

Meanwhile, while stakeholders in the nation’s maritime industry are still at a loss why in an era where the clamour for local content is the vogue especially in the oil and gas sector, the minister is routing for an Israeli company Messrs HLSI Security Systems and Technologies to take charge of our territorial waterways.
Unfortunately, prior to the advent of the Coronavirus pandemic, the minister has revealed that the Israeli company is yet to begin the execution of the $195 million security contract it got from the Nigeria Maritime Administration and Safety Agency (NIMASA) to secure the nation’s maritime domain.
The minister told stated this during a shipping industry forum in Abuja told reporters that platforms and equipment meant for use under the contract were still being manufactured, adding that it would take some time to have the platforms delivered. He however hinted that the Nigeria Navy, Air Force and other agents who would man the platforms under the contract are currently being trained.
The $195 million maritime security contract was signed off by the Federal Executive Council in December 2017 and was for the provision of three helicopters, three air planes, three big battle-ready ships, 12 vessels and 20 amphibious cars, to aid security of Nigeria’s waterways.

The fate of HLSI Security Systems and Technologies

In January 2018, the House of Representatives criticised the management of NIMASA for awarding the contract to HLSI, saying it was a breach of Nigeria’s internal security and defiance of the local content law.
Similarly, President Muhammadu Buhari in May 2018, cancelled the contract via a memo directing the Attorney General of the Federation, Abubakar Malami, to terminate the contract. In addition the National Security Adviser and the Nigerian Intelligence Agency where charged to investigate how the contractor obtained security clearance without an end-user certificate.
Buhari also ordered HLSI to supply equipment to the tune of the $50 million upfront payment it received from Nigeria.
However, a new twist emerged in August 2019 when the federal government through the ministry of transportation reinstated the contract.
Amaechi who announced the reinstatement had promised that the equipment to be use by the firm would arrive the country’s waters before December 2019.
Trying to justify the $195m maritime security contract, Amaechi told journalists at the Abuja forum that Nigerian importers were paying war risk surcharges for vessels to berth at Port Harcourt, Calabar and Warri Ports as a result of piracy and activity of militants.

The battle for the takeover of the SAA is not new, but what is becoming worrisome is the minister’s decision to listen to words of wisdom. For instance, a joint committee of the Nigerian Senate on the Nigerian Navy, Marine transport and Finance had in October 2019 investigated claims of illegality of the operations of OMSL at the SAA of Lagos sea came out with a report offering useful suggestions of how to advance the sector.
The committee, after its careful investigation recommended among others, “That Ocean Marine Solution Limited (OMSL) should be commended for its genuine national interests in investing over Four Hundred Million ($400,000,000) Dollars into the Security at the Secured Anchorage Area (SAA) in particular and the Nigerian waterways in general by providing the needed platforms and logistics for the Nigerian Navy to effectively perform 24/7/365 patrol operations as well as to provide the required protection for vessels waiting to berth at the Lagos ports.”
On the issue of defrauding the nation, the committee said, “That since no fraud is found in the operations of the OMSL and is operating at no cost to government, OMSL should be allowed to continue its operation at the SAA until such a time when a better and more cost effective system is put in place by the government.
And, “That the Nigerian Navy should be properly funded to enable it procure needed vessels to clear the over one hundred and fifty (150) vessels deficit to enable them carry out their constitutional responsibilities without over depending on Private Maritime Logistics Support Companies (PMLSC).”
In a similar view, However, ports users argued that the SAA is saving ships about $225,000 on each call at Lagos ports.

However, ports users had argued that the SAA is saving ships about $225,000 on each call at Lagos ports.

The National President of the National Association of Government Approved Freight Forwarders (NAGAFF), Increase Uche, told journalists that contrary to claims that the SAA is leading to increasing in cost of shipping, and security of ships at the SAA by the Nigerian Navy, using platforms provided by OMS Limited, is helping multinational shipping lines to save a whopping $225,000 on a journey to Lagos ports.
He said: “We don’t want to go back to the old order. We are asking the Federal Government to look critically into this issue so that the SAA is not dismantled.

“As freight forwarders, we are major port users of shipping services, moving cargoes across seas to Nigeria. We are comfortable with the service, and we urge the Federal Government to let the SAA be so that multinational shipping lines can continue to patronise our seaports,” he said.
Uche added: “To us the practitioners, what we are advocating is that government should look at the issue critically. If the NPA is agitating that such measures should be terminated, let us look at it holistically and ensure that the government is not being short-changed.”

Fighting over Lagos port SAA at the expense of others

There is no doubting the fact that the minister and his agencies appears not satisfied with the decision of the joint Senate committee that investigated the allegations they levied against OMSL. Consequently, the battle to terminate the contract it entered with the Nigerian Navy continues to take priority even when there are indications that the nation will have to suffer for it.
Some questions that readily come to mind here includes: Why is Amaechi more interested in a foreign firm providing security in Nigeria’s waterways instead of an indigenous firm that has proven that it has the capacity? If the money being made is the issue can the management of NPA and OMSL meet and decide how the federal government can benefit from the income been generated? Why is it difficult for the SAA initiative to be extended to other seaports across the country? Are the ship owners who belt on the SAA platform complaining? Why cannot the NPA support the Nigerian Navy with the necessary equipment to help secure the waterways using the SAA model at a fee? Must the Lagos SAA program be destroyed before such initiative can be extended to the other seaports?
There are numerous questions begging for answers when it comes to the issue of the Lagos port SAA, but what must be paramount on the mind of our leaders should be cultivating the altitude of supporting indigenous firms. After all the local content Act was enacted for that purpose.
The danger of inviting foreigners to take charge of our maritime security cannot be overemphasized that is why the minister and OMSL must dialogue and resolve the issues at stake. At least to prevent another mortgage the sovereignty of the nation’s maritime industry.