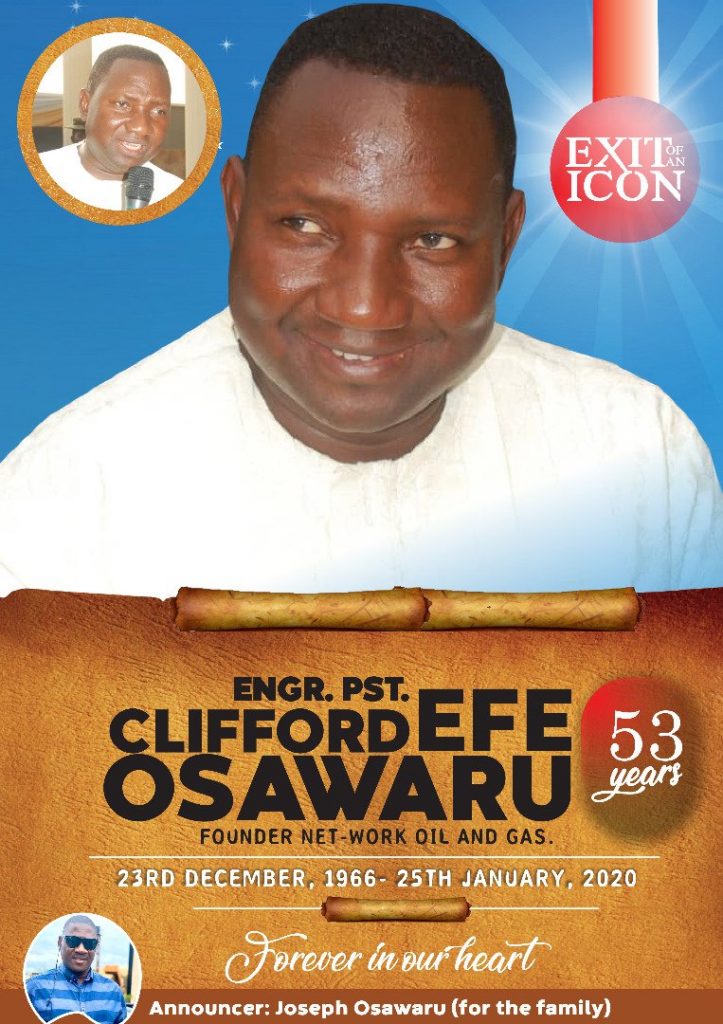 Pastor Clifford Efe Osawaru was born on the 23rd December, 1966 at Umoghun-Nokhua community of the Orhionmwon Local Government Area of Edo State. Pastor Clifford Efe Osawaru was natural gifted and endowed with unusual management and technical skills though he had his ordinary and Advance Diploma from both Petroleum Training Institute and Houston University Cullen College of Engineering in 1990 and 1992 respectively. His depth of knowledge in Electrical/Instruments engineering, unconventional but productive management skills surpasses those of his contemporaries in his field. Pastor Clifford Efe Osawaru was also a seasoned technocrat with wealth of experience in instrumentation and Electrical EngineerHe had more 25 years experience with Shell Petroleum Development Company (SPDC) and Elf Nigeria Ltd and other top ranking private Oil and Gas firms in Nigeria within and outside the country in the oil and gas industry, specifically in electrical/instrumentation, engineering design, gas plants commissioning, production and operations. Pastor Clifford Efe Osawaru was first and foremost an ordained minister of the gospel that has not only planted churches for Living Faith Church (Winners Chapel) in Port Harcourt areas, Rivers State but has also by divine grace built two churches for the ministry in his community and neighboring community of Umoghun-Nokhua and Ologbo respectively in Edo State. He was a lover of men and God. He was resolute about the wellbeing of his people that he was not only concern about their spiritual well-being but was also concerned about their health. This prompted him to establish a foundation and in conjunction with his oil and gas firm, Network Oil & Gas Ltd to build an ultra-modern 21st Century Solar powered 20 bed clinic with well-functioning laboratory and pharmacy, labour room and surgical theatre that diagnose, treat and dispense drugs free of charge from 2014 to date to sixteen (16) communities both within and the neighboring state. Pastor Clifford Efe Osawaru was the founder and Chairman/Managing Director of the first indigenous EPICOM Company that specializes in construction, maintenance and operations of integrated gas handling facilities in Nigeria for both public and private firms in the oil and gas sector of Nigeria economy. Pastor Osawaru was also passionate about the development and training of his people that he decided to establish a private university that will meet the need of Edoites in the 21st century in engineering, Information Technology, Medical Sciences. He has been given approval to commence construction by the National University Commission and was about to commence the building of physical structure before his sudden departure to glory. Pastor Clifford Efe Osawaru is happily married to Mrs. Mercy Osawaru and are both blessed with four (4) Children. Finally, Pastor Clifford Efe Osawaru lived a life of uncommon impacts in the lives of people, community and churches.