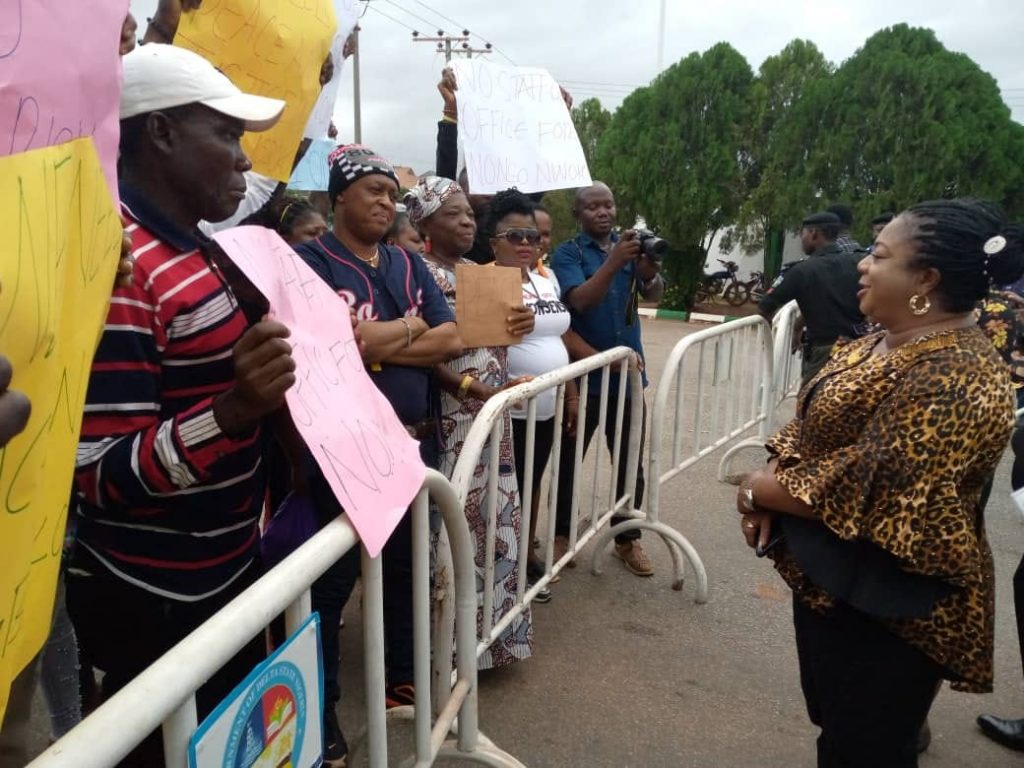 A group of women from Idumuje -Ugboko community in Aniocha North local government area of Delta state today held  a protest at the capital city of Asaba
accusing the crown prince of the community, JUSTIN CHUKWUNONSO NWOKO  of  acts of terrorism,murder, harrasment and  intimidation

The women, who matched to Government House, Asaba alleged  that Prince  Chukwunonso  Nwoko who is yet to receive staff of office as King  from the Delta state government  has  continually destabilized the community, through mayhem and divide and rule, since the past few years.

The group said  there was heightened tension in Idumuje-Ugboko ,alleging  that Prince Nonso Nwoko does not need peace and development of the community.

They appealed to the Governor not to  recognise him as King,accusing him of alleged tyranny and highhandedness.

The women accompanied by some youths of idumuje – Ugboko,submitted a protest letter to government house,on behalf of the female folk in the community,signed by Mrs Faith Nwoko ,Mrs Ifeoma Nwoko, wives of the Late Obi Albert Nwoko and a PDP woman leader Gladys Kogwuonye.

The signatories also stated that there had been unprovoked attacks by Prince Chukwunonso against a prominent son of the community, Prince Ned Nwoko over a large expanse of land acquired for the development of a university in the community by the former House of Representatives member.

“As women and adult mothers living in the community, we are witnesses to the fact that every land obtained  by Prince Ned Nwoko for the STARS University and international Golf course project were legally acquired,during the reign of HRM Obi Albert Nwoko III; JP; MON ,before he passed on in 2017.

“The late Obi and the traditional council gave the land in peace and joy with a memorandum of understanding MOU of 60- 40 shares on the university between Linas international and the community.But his Son, Prince Chukwunonso Nwoko decided to reverse the existing legal deeds, unjustly sponsoring crisis within the community” The women said in the protest letter.

Meanwhile, another group of women had clashed with the protesters,demanding that Government should stop police from harassing the crown prince, Nonso Nwoko.

The Commissioner for Women Affairs Mrs Flora Alaitan received the two protesting groups on behalf of the Governor, assuring that  the state government would bring peace and justice to the community.

Speaking earlier, Prince Nonso’s nephew, Prince Chukwuma Nwoko said , “the drama of Prince Nonso Nwoko started sometime in 2017 when the former Obi Albert  Nwoko 111, joined his ancestors. The next thing , he started contesting the land given to our own brother, Prince Ned Nwoko to develop a University project. Because we needed that academic development in Idumuje-Ugboko, we refused to join him in such retrogressive campaign and he started sending thugs to destroy houses belonging to anybody in support of the University project, including mine”

“As if that was not enough, in one of the peace meetings called to settle all parties, Prince Nonso’s thugs started shooting at random and in the process an innocent Motor cycle rider, one Cyprian Kamaoro was shot dead. I saw the dead body myself, which was later taken away and  buried secretly  at night .The community is under siege by cultists and thugs loyal to Prince Nonso Nwoko, that is why we want to draw the attention of Government to what is happening” Chukwuma said

Also speaking, an indigene of the community,Gladys Koguonye claimed that some of them could no longer sleep in their houses for fear of Prince Nonso’s thugs. She insisted that the Crown Prince should be prosecuted for the properties destroyed as well as acts of alleged violence and murder.