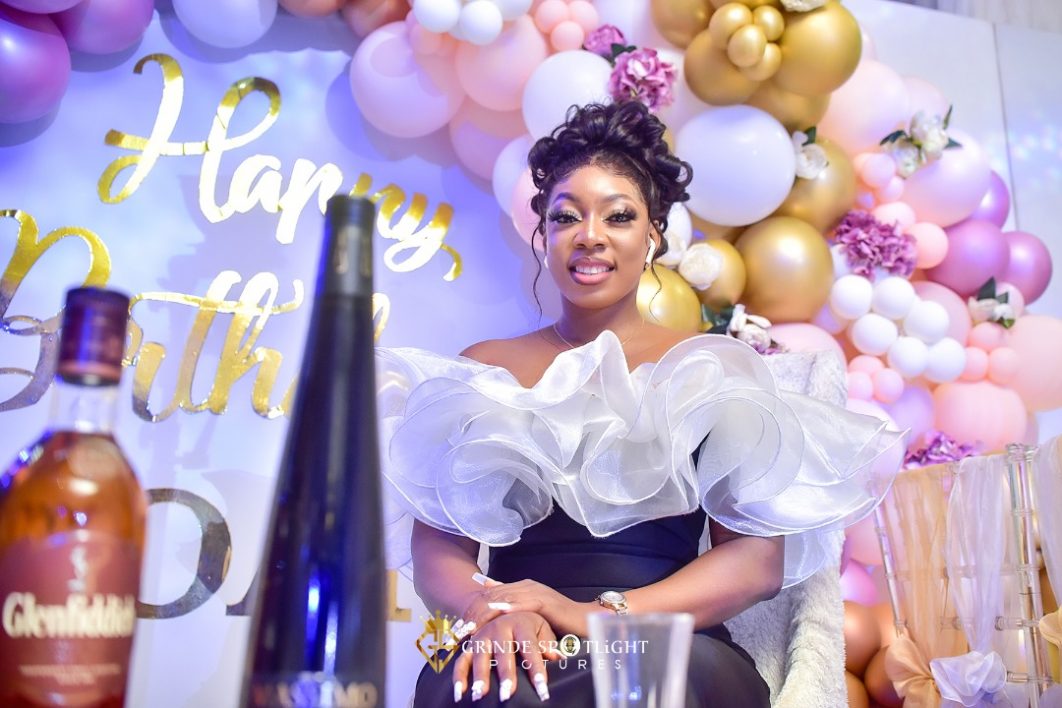 Former Beauty Queen and the Executive Director Finance and Administration, The Divine Smiles foundation international, Joan Oboh over the weekend celebrated her 30th birthday party at the luxury Golden Tulip Hotel in G.R.A Benin city, Edo State. It was an occasion to thank God for life for this accounting graduate of Benson Idahosa University. Joan aka Queen Jojo could not hide her joy amidst friends and family who came out to celebrate this serial entrepreneur. One of the many that showers Encomium on Queen Joan was the President Eerik’s Entertainment Home limited and the Chairman of The Divine Smiles foundation international, Prince Eerik A. Odigie who discribed her as Destiny Assistant, dream helper, hardworking and a loyal personnel “By the grace of God, I can only describe her as a destiny assistance, ever since she took her role as the supervisor, then she grew to become an executive director and now she is the finance director of the The Divine Smiles Foundation International a girl who came in as a beauty Queen”.

The organizers of face of Edo beauty pageant and face of the world Nigeria beauty pageant, Prince Eerik also stressed that It can only be divine providence to have met such a wonderful God’s handiwork to have ever crossed our organisation where others lie, blackmail, betray and serious negative conspiracies by the same persons who have been in her shoes enjoying the pecks and rewards of being in an organisation that has elastic goodwill and connections from the men and women that matters due to our track records of performance and ingenious ideas.

Joan Oseyande Oboh is an exemplary member of the organization and a society of ours that lacks genuine mentors and positive image to learn from. She stands out as an amzon of hope.

Some discribe her as gentle in her approach, she’s sweet soul and academically sound and sound minds which you can see her display her intelligence in carrying out her duties.

In his wish for the birthday girl, Prince Eerik said “I wish that as you grow higher and marry a man who will respect and cherish you . I also pray that your dreams will be achieved through God’s ordained destiny helpers who make her work less and achieve greater things.

Someone like Joan has so much found memories to relish about. She’s the 1st love of my two kids.

Prince Eerik Odigie went back to memory lane when their paths crossed, I can remember when I told her that she won’t win since her dad wasn’t in support of the pageant and she cried her eyes out only for her to emerged the winner.

I can also remember when she cried on the day of our pageant as we presented a car to her for her hardwork and dedication to serve.

I enjoy travelling with her because she’s a good driver and a good gossip mate’s.

I could still remember when I told her that she would get an admission into The prestigious Benson Idahosa University which she now has a diploma bachelor degree in accountancy. Celebrating this heroine is an honour as she clocks 30! we hope and pray for her to excel in God’s hands as always and shine on in all her engagements in life in Jesus Christ Name.
Happy Birthday to Fabulous Joan @ 30 who has found a new fame by featuring in comedy skit on Instagram. The birthday party attracted creme de la creme of socialites in Benin Chief Owen Obaseki; Chairman of DVD OIL and GAS Valentino Asuen; Chairman of Viju milk Sir Collins Mbaegbu and former Executive director of the office of the first lady Amb. Uche James okoro and many others. the event was anchor by Mc Favour (Excuse me while I dance), MC DA SAINT and Mc Edo Pikin.