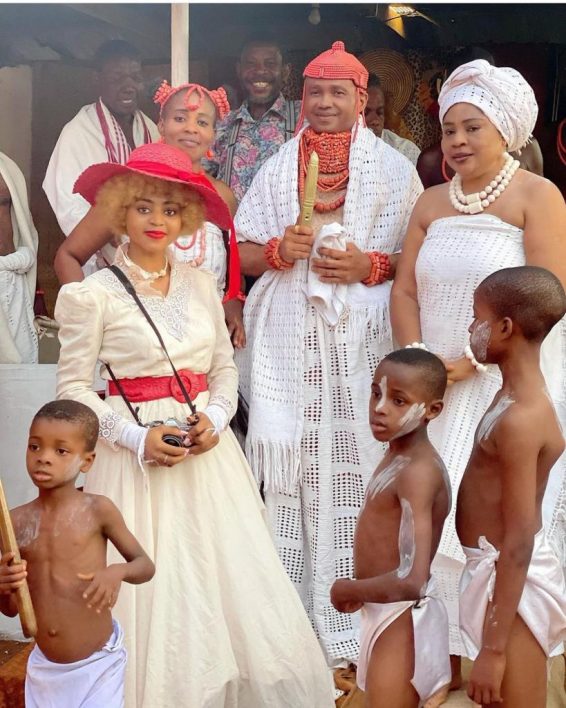 The Ochudo of Ogwashi-Uku Kingdom and Vice-President, Actors Guild of Nigeria Chief (Hon.) Rita Daniels has started the production of the highly- anticipated movie; Ije Ifunanya (Journey of Love).The movie which is being shot at various locations in Ogwashi-Uku, the home town of the popular actress and film producer, has Nollywood A list Stars on set.

The Ochudo of Ogwashi-Uku Kingdom said it’s her dream and aspiration to make Ogwashi-Uku one of the sought-after locations for movie production as she is bringing in her wealth of experience in the movie industry to build a Film Village in Ogwashi-Uku.”I can tell you that Ogwashi-Uku has perfect locations for movie production. We are a people with rich and diverse cultural heritage. We should start telling our stories to the world and preserve and project the beautiful lifestyle of our people”, she said.The movie which also has other A list actors and directors like Regina Daniels, Lancelot Imasuen, Paul Obazele, Igwe Tupac and a host of others is a love story told in a typical Ogwashi-Uku traditional setting many decades ago.

The actors and Production crew are amazed at the love, hospitality and support of Ogwashi-Uku people. “It’s very interesting shooting in Ogwashi-Uku, the people are lovely, welcoming and very accommodating, they make the job easy and interesting” one of the stars said.Ije Ifunanya, written by one of Nollywood’s best writers Emeka Ekwedike and Produced by the Ochudo of Ogwashi-Uku Kingdom, Chief (Hon.) Rita Daniels, is set to hit cinemas locally and internationally soon and it will be a delight to watch Ogwashi-Uku being showcased to the world in a “journey of love”.