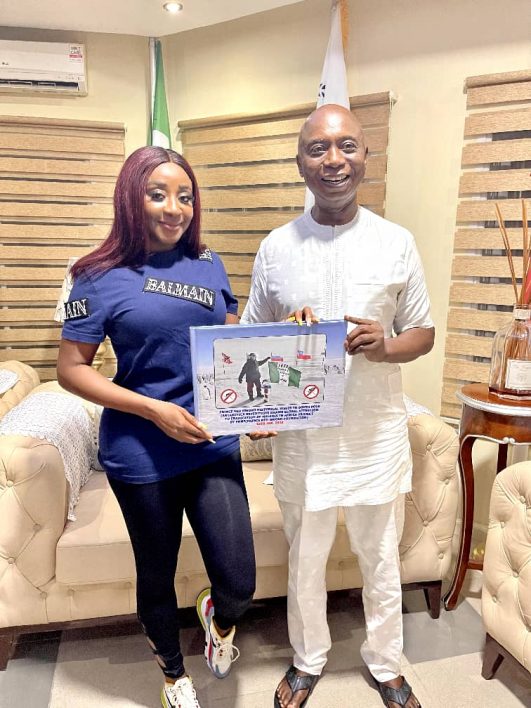 In a bit to put an end to Malaria, one of biggest scourge in Africa, the Billionaire Philanthropist and Antarctica explorer, Prince Ned Nwoko has been hosting some of the key stakeholders in Nigeria and Africa to support his malaria eradication project. Over the weekend, he received a courtesy visit from Multiple Award winning Nollywood Actress, Ini Edo.

The script interpreter, Ini Edo pledged her support and endorsement on Ned Nwoko malaria project especially in the area of advocacy and creating Awareness.

It would be recalled that Hon. Ned embark on the symbolic expedition to the south pole in Antarctica as the first black man in the history to draw the attention of the world to the scourge of malaria in Africa in January 2020 when he hoisted Nigeria flag in Antarctica with inscription “Let’s eradicate Malaria in Africa”. In 2019, there were 229 million malaria cases globally that led to 409,000 deaths. Of these deaths, 67 per cent (274,000) were children under 5 years of age. This translates into a daily toll of nearly 750 children under age 5.

Prince Ned Nwoko thanked the nollywood actress Ini for identifying with this noble course to eradicate malaria in Africa starting with Nigeria through Advocacy and Awareness, vaccine development, Environmental sanitation, waste Management and creation of an Agency that will see to the sustainable implementation of the Project.