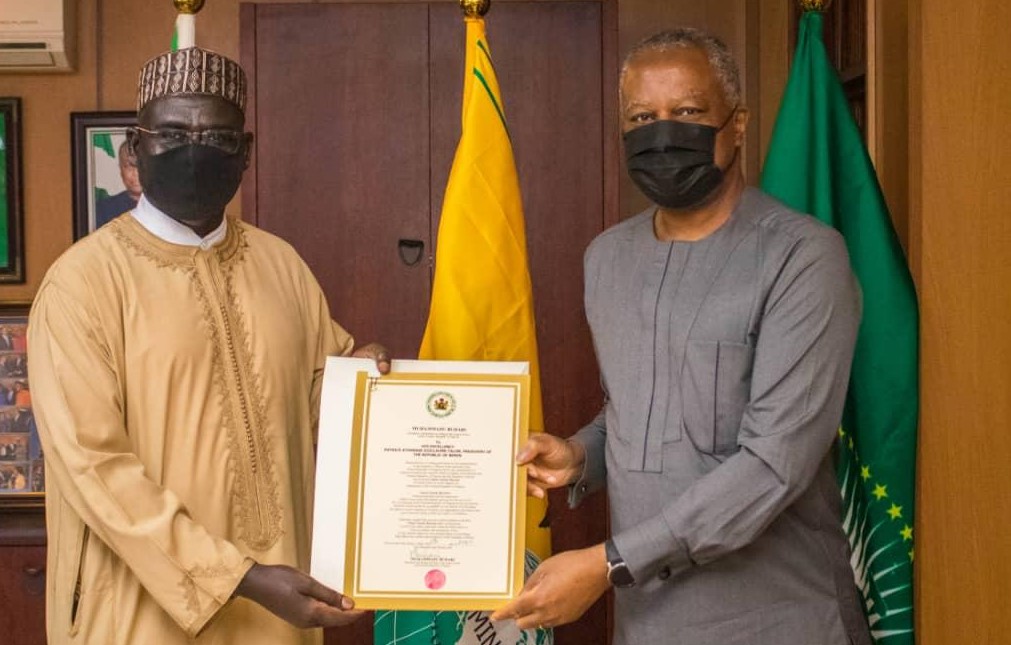 National Association of Online Security Reporters, NAOSRE, in this piece, cast a diagnostic review and analyses of the appointment of General Tukur Buratai as Ambassador to the Republic of Benin.
The association predicts sound health resulting in a reinvigorated diplomatic relationship between Nigeria and its Francophone neighbour, capable of checking illegal arms and ammunition smuggling that fuel insurgency in Nigeria

Judging by Standard Performance Evaluation, SPV, even the most incurable cynics, among public affairs analysts, cannot help but attest to the fact that Lieutenant General Tukur Buratai (retd) was a performer and an achiever, who reclaimed zones and territories which were hitherto occupied by insurgents prior to his appointment as the Nigerian Chief of Army Staff in 2015.

At the time, terrorism had become a national nightmare, a worrisome development that needed immediate remedies as insurgents occupied and hoisted their flags in five states of Borno, Adamawa, Yobe, Bauchi and Gombe.
In these states, no fewer than 21 local government areas were seized and occupied by the deadly jihadists, who perpetrated their inordinate territorial expansion with mindless bloodshed and untold atrocities.

With Gwoza as their main caliphate administrative centre, the insurgents turned the surrounding areas to a killing field where many emirs, community leaders and their people were killed at will.
Over 20, 000 Nigerian hostages, including the Chibok schoolgirls were scattered in different locations of Boko Haram secret camps.
So bad was the situation that the Northeast region was substantially closed to public or social life for dread of the atrocities of Boko Haram.

But on the assumption of duty in July 2015 at the height of the insecurity problem, Buratai, an infantry combatant, hit the ground running. Incidentally, he did not assume the position of Army Chief unprepared. From the records, he had spent the best part of his military career in the trenches, fighting wars to keep Nigeria together.
In some important respects, he was involved in the UN Peace Keeping Missions in Angola and other countries. At a time, he was in the creeks of the Niger Delta fighting incendiary militants, vandals, and economic saboteurs bred in the region.
He was the Field Commander of the Multi-National Joint Task Force (MNJTF), the multi-nation military outfit conceptualized by Nigeria, Niger, Chad, Cameroun and later on, Benin Republic to battle terrorism in the sub-region.

In all these assignments, he earned medals and awards for his exemplary and excellent performances, which consequently earned him accelerated promotions in recognition of his exceptional military exploits and results.

As Chief of Army Staff, Buratai demonstrated courage and leadership on the battlefield and supervised the counter-terrorism operations against the resilient Boko Haram insurgents and terrorists of Islamic State West Africa Province (ISWAP) in line with global best practices.

His initiatives transformed the Nigeria Army into an entirely new institution with reforms and innovations.
Before he left office, he got the Army new specialized Army schools while old and abandoned army institutions were revamped.

He returned Nigeria Army to its glorious path of self-dependence where it manufactured some of its warfare equipment and visibly changed the narratives of the anti-insurgency combats, progressively.

Buratai, Grand Patron of the National Association of Online Security Reporters, NAOSRE, also established far-reaching synergies with the armies of other countries, in the West African sub-region and outside the continent, with the likes of India, Brazil, Bangladesh and Pakistan.
Sensitive knowledge sharing and exchange of experiences on combating terrorism became a regular feature of his leadership.
This accounted for his success in the anti-insurgency war.

He reorganized and empowered the Department of Civil-Military Affairs (DCMA) to function effectively, especially in the campaign for the protection and respect for human rights by the Nigerian Army. The first step he took to checkmate human rights abuses was to rejig and strengthen the DCMA.

Consequently, sensitization workshops and campaigns on the protection of human rights were dynamically conducted for members of the Nigeria Army.

Worthy of mention, as an attestation of his sophisticated diplomatic and public relations skills, was the Human Rights Workshop in 8 Task Force Division, where he was represented by Major General Nuhu Angbazo, the then Chief of Civil-Military Affairs.

That workshop confirmed that the Nigerian army had embarked on a drive to educate troops in the Laws of Armed Conflicts and therefore avoid unprofessional conducts that could destroy their careers and tarnish the good image of the Nigeria Army.

Buratai took a bow from military service on Tuesday, January 26, leaving Nigeria on a better anti-terrorism rating than he met it.
President Buhari, who superintends over the Armed Forces of the Federal Republic of Nigeria and supervised Buratai at close range in his capacity as Army Chief, nominated him for Ambassadorial assignment.

The nomination on Thursday, February, received mixed reactions in the public space.
While some applauded the presidential foresight on account of Buratai’s commitment to degrading insurgency, others simply went for his jugular, citing imperfections on the battle front, which in their estimation, resulted to infringement of fundamental human rights.

Senate confirmed the nomination on February 23 and letter of credence was issued on Wednesday, June 23.

Erudite scholar, Samson Aboh of the Federal University, Lafia, in a piece, emphasizes that Buratai’s encounters and relationships with foreign countries, especially in the Francophone bloc, would benefit Nigeria tremendously in his new assignment as Nigeria’s ambassador to the Republic of Benin.
“It is my utmost conviction that Nigeria can better resolve its internal problems of insurgency if the country strikes a strong diplomatic synergy with francophone countries.
“Ambassador Buratai stands in good stead to anchor these diplomatic relations between Nigeria and these francophone countries,” he writes.

In like manner, Governor Mala Buni of Yobe State, in a recent public statement, expressed confidence and trust in the appointment of Buratai as ambassador to the Republic of Benin.

He noted that the former army brass has the implicit skills and knowledge to represent Nigeria and develop synergy with the Beninoise to check illegal smuggling of weapons into Nigeria through the 809 km Benin–Nigeria border which stretches from the tripoint with Niger in the north down to the Bight of Benin in the south.

Buratai, he added, can replicate his military successes in diplomacy.
Governor Mala-Buni, the chairman of the All Progressives Congress (APC) Caretaker Extraordinary Convention Planning Committee (CECPC), said the newly appointed ambassador would be a worthy representative of Nigeria in Benin, noting that he would bring to bear his wealth of experience in discharging his duties.
“l have great confidence in your ability to build a viable and strong relationship between Nigeria and the Republic of Benin.
“Your meritorious service in the army has built great confidence around you, which earned you this appointment,” he said.

This submission by Governor Buni reinforces the belief in many quarters that the strategic intention by President Muhammadu Buhari to build a wall of defence around Nigeria by posting immediate service chiefs as ambassadors will sufficiently check the unchallenged free movement of arms into the country.

These remarks and beliefs are the needed conviction of a new dawn that is capable of strengthening internal security mechanisms led by the current service chiefs and the team of retired officers as ambassadorial rings around Nigeria’s borders.

Without doubts, General Buratai would up his diplomatic and public relations game to synergize with the neighbouring countries and put a check to the movement of illegal arms. This would help Nigeria a great deal considering how Nigeria’s current epidemic of insecurity has brought illegal possession of guns into public view.

The more illegal arms that have entered into circulation, the higher the death toll and the more widespread the atmosphere of fear and insecurity.
The proliferation and easy access to small and light arms has of late attracted the attention of both government and the elite.

General Abdulsalami Abubakar (retd), former Head of State and Chairman of the National Peace Committee disclosed the extent of arms proliferation in the country in a report by his committee.

The report indicated that there are over 6 million (6,145,000 to be exact) guns in the hands of private citizens.
The current total population of Nigeria’s armed and security forces is about 300,000 with 89,000 reservists.

If Police are added, Civil Defence, Customs and other departments officially allowed to bear arms, the entire security architecture does not have more than 500,000 legal arms in the holding of the state.

This simply means that the state and its security forces are outgunned by a high deficit ratio, a development Buratai would tackle as Benin Republic Ambassador.

In all of this, however, the appointment of Buratai signals diplomatic fresh onslaughts against insurgency and an end to subsisting challenges in the fight against terrorism including lukewarm strategic cooperation with francophone countries.