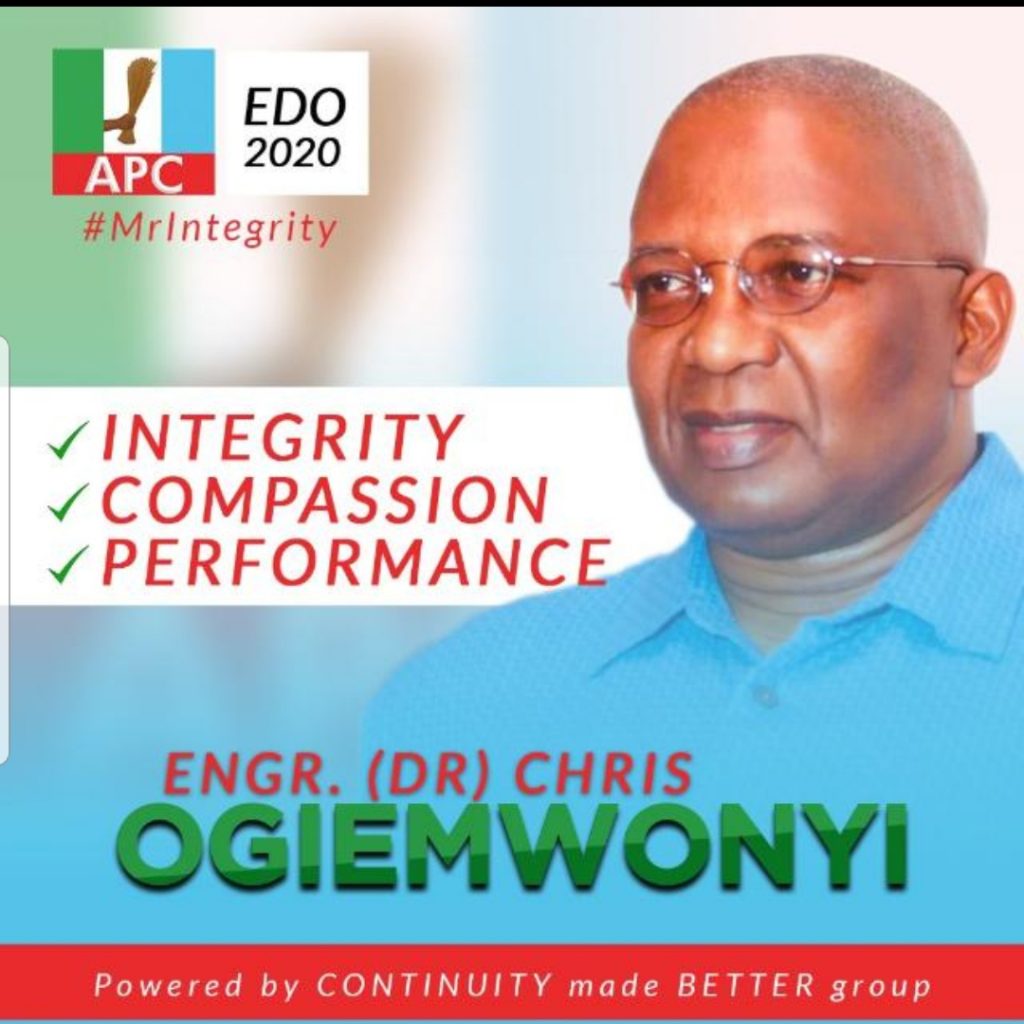 As Governorship aspirants jostle to battle for their party’s ticket, former minister of state for work and Frontline Governorship aspirant, Dr Chris Ogiemwonyi, yesterday said that his 10 points agenda is what Edo state need to attain social-economic transformation in the state.

The former minister whose public and political records earned him the appellation of ‘Mr Integrity’ said if elected the governor the state would witnessed massive infrastructural development and agricultural revolution.

Ogiemwonyi, who is contesting under the platform of the All Progressive Congress, APC, said rural communities in Edo state will be given priority in term of development thereby reducing rural urban drift.

The Governorship hopeful said his desire to contest the 2020 Governorship race is to uplift the living standard of Edo people and leave a lasting legacies.

He said: “I have a 10-point agenda and I am the only aspirants now with manifestoes. In my agenda, I am shifting emphasis to internal security because without security, you can’t have any meaningful development. I will spend much money to restore normalcy in the state”.

“Once I do that, I will start development which will include infrastructure, agriculture, harnessing solid minerals, preventive medicine and restoration of normalcy in the rural areas to halt rural-urban migration. I will ensure that I pull back the youths to the villages with the provision of electricity and use sports as a unifying factor for them. I am coming from the oil and gas industry with lots of experience”.

“My coming as a governor will be the best thing that has happened to Edo state. You will see a governor who is an operation man; we need an operation and not a technocrat who sits in the office. One thing I will introduce if I become governor is evaluation and monitoring because, what I see common today is that people only delegate. But in my case”.

” I will do project monitoring and evaluation. Late Ogbemudia did this in his days while building the Ogbe Stadium; you see him wearing jeans and T-shirt unannounced to supervise projects. We need such governors today. There is much to be done now because, Edo is very low in terms of development when compare to other states. We need to wake up and do something aggressively”.

Former American President, John F, Kennedy once said “Ask not what your country can do for you but what you can do for your country” Ogiemwonyi does not wait to be told when and how to give back to the country, he has always rise to the occasion on his own without being called upon to give back to the country. No wonder he recently supported the effort of federal government to curb the spread of Covid-19 by providing relief materials and sensitization programs in all the 18 local government in Edo State and as if that was not enough, he also distributed massive food items as a palliative measure to the three senatorial districts during the Easter Period as a result of the lock down.