Pendulum: The Making of My Interview with Mazi Nnamdi Kanu 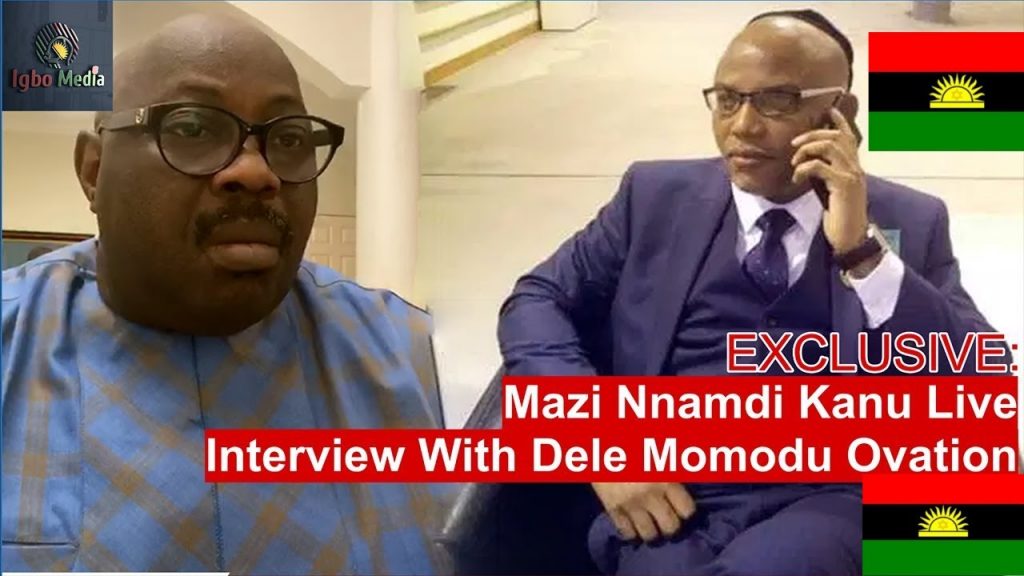 Fellow Nigerians, let me start by thanking God for my unusual mindset. I’m also grateful to those who have mentored me in journalism. I single out for mention here, one perfect gentleman in particular, Mr Mike Awoyinfa, who was my Editor at Weekend Concord from March 1989 to May 1990. He remains my Boss for life. Awoyinfa introduced me to the words “scoop”, “world exclusive” “inside story”, exposé, and so on. He taught me how to search for, and get, uncommon stories. For any seasoned reporter, there is no orgasm sweeter than getting that story everyone is talking about. It does not matter if someone somewhere would not like the story, but everyone must see or feel it ultimately. That is your goal, your holy grail!

I was fortunate to have met my first Boss, Mr Lewis Obi, who gave me a job instantly in 1988 at the African Concord magazine, owned by Chief Moshood Abiola. Obi had told me of his serious gift for identifying and hiring masters of prose above trained reporters. For him, anyone can become a reporter, but not everyone can be a super writer. A good writer can turn a tiny story into a masterpiece. Both of my Bosses, Obi and Awoyinfa, prepared me for my journey through the labyrinth of journalism.

I’m very passionate about special interviews and I do not discriminate once I smell some great news. And anything can trigger my interest in a particular subject or character. My interest in talking to our former Petroleum Minister, Mrs Diezani Alison-Madueke, was the news of her arrest by the British Police in London. While the Media world went gaga and published salaciously dramatic stories about her, I was interested in locating her and asking some of the burning questions on people’s minds. It didn’t matter if some people would feel offended and intolerant of this world exclusive. Awoyinfa had taught me how to damn the man-made consequences and face my job squarely; that many of the attackers and detractors would later turn around to appreciate my efforts. This has been proven to be the case and has become a well-tested truism over time.

It was this same mindset that led me to MAZI NNAMDI KANU, the influential leader of the Indigenous People of Biafra (IPOB). My Sister-in-Law had forwarded an audio message to me in the heat of the #EndSARS protests. The voice on the audio was clearly that of MAZI NNAMDI KANU, a man whose deification, and apotheosis, is possibly assured. Such is the adoring, and adulating manner and esteem of his people. He is obviously and passionately loved by them. In the audio, he was firing instructions at some of his supporters. I was greatly alarmed and extremely uncomfortable. The motive was not clear to me. So rather than spread the audio without having the authentic story, I decided to seek him out. Journalists are like detectives. I knew I had to identify someone close enough to know how to find him. My mind roamed at first far and wide, but almost immediately it set and fastened on the irrepressible Mr Femi Fani-Kayode. I called Fani-Kayode who promised to contact Kanu as soon as possible. He soon returned with a text message to my WhatsApp after he gave my contact to someone very close to MAZI NNAMDI KANU. The gentleman established immediate line of communication with me. By the following morning, I received tentative approval to proceed but to allow a space of about two weeks. I responded that I needed the interview right away in view of the violence visited on some parts of Lagos. I felt it was a fortuitous time to deal with Mazi Kanu’s gospel of emancipation for the Igbos and the violent protests and carnage that had rocked our beloved country, although Kanu will probably not agree with me. My request was swiftly granted, and we fixed Thursday, October 29, 2020 as D-Day.

My office designed the promotional posters, and we started the publicity in earnest. Then I started getting all kinds of pressure from those who wished to discourage me from interviewing Kanu. I was not surprised because Kanu is simply a very controversial personality loved and hated by throngs alike. He was described sometimes in unprintable and unspeakable ways. I was told he is this and he is that. However, the more they opposed it, the more I knew I must have the Instagram live session. I can be professionally obstinate like that. It must be the very radical past of my youth that comes to the fore at such times. I must confess though that I was pained that even members of my nuclear family were reached and were told and persuaded to dissuade me. I remained adamant and undaunted. I’m a Taurean and we are not so easy to intimidate and bully. I’m glad I did not blink or shrink or shirk away from what I now believed was my responsibility and duty. I was totally focused on my target and mission. And eventually, it worked out as planned.

Once I had concluded that the interview was definitely on and could not be abandoned on the whims and fancies of those who do not respect free speech, freedom of expression and democracy, I set about meticulously planning the event The next thing was therefore to do a thorough research on Kanu and IPOB and prepare to ask the most pertinent, perspicacious, penetrating and most relevant questions. From my research, I knew this could be a very volatile session, so I made sure I rehearsed and choreographed everything in advance and in feverish anticipation. I also prayed. I believe in the efficacy of prayers. I needed to pray because of the contending forces at stake. And God took control.

I had the questions painstakingly prepared and revised several times. The program was elaborately planned.

– A bit about yourself

– You’re seen by many as waging a war against your country Nigeria by seeking a Biafra nation.

What led to your decision?

– Military and security experts have said it is impossible for any country to fight two civil wars without monumental repercussions. Have you considered this?

– The Igbos are obviously marginalized in the political configuration of Nigeria, but they have done extremely well, globally, in business and commerce in general. Won’t their spectacular achievements be put at risk?

– It has been theorised that the so-called “Fulani hegemony” has endured because of the lack of unity amongst the peoples of North Central, South East, South South and South West and that if they unite they would end the perpetual dominance of the so called Northern oligarchy.

– Is Biafra your only option or you’re willing to work with other oppressed peoples of Nigeria to form a union, like it is in the United Arab Emirates?

– An audio surfaced recently with your voice clearly and audibly directing your operatives to hit some targets in Lagos. What led to this in a State that has really embraced Igbo people of South East and South South extractions?

In retrospect, do you regret this action and are you willing to seize this moment to apologize to the Yoruba people and begin to work with them henceforth?

– What’s your view on the #EndSARS campaign

– You and my good friend Femi Fani-Kayode seem to enjoy a special bond. What’s the link?

– Many have sent in this last question about you and President Muhammadu Buhari about your theory of a cloned man and that our current President is a Sudanese man called Jubril. Do you agree that your information might have been wrong?

Suggestions:
– You’ve been sent posters advertising the live session. Please, feel free to share with your audience before the session.

– Please try to sit a fair distance away from the camera so we can see you clearly. If possible, please use a phone stand.

– If possible, please have a pair of earphones close by in case viewers complain about the sound bouncing back or echoing…

These were some of the teasing, riveting questions I believed I had for Kanu. I was eager to see how he would react and respond.

Once I was pleased and satisfied, I left the rest to fate. Other questions would flow and follow from the answers to these startling questions. It was my hope and expectation that Kanu would have revelation moments.

About two hours to the live session, Kanu was ready for a test run. I was humbled by his commitment, assiduousness, absolute cooperation and apparent discipline. He agreed I could ask any question, which is always a plus and demonstrates confidence and conviction. The test run ran smoothly, and the few minutes formed part of our promotion and helped reassure viewers that he was truly going to appear. Some had begun to despair!

I must confess, Kanu blew me apart with his sharp wit, witticism and super intellect. I discovered why he commands such humongous respects from his devotees who literally worship him. We had some tense moments. I was glad he apologized over the audio linked to him. We couldn’t agree on his Buhari theory of cloning and such stuff. It was within his rights to hold steadfastly and tenaciously to his beliefs and I also had a duty to let him hear contrary views and opinions.

It is good to talk. That was my conclusion. A democratic government must always promote the culture of dialogue. You can’t fix what or who you don’t understand. Kanu is a remarkably brilliant man. Hate him or love him, he knows what he wants and will do or die for it. My final questions affirmed this.

I asked him one of the viewers’ questions: “are you not aware of repercussions and that your life could be endangered!” His response was astounding. “I’m already a dead man!” That was it, the mother of all interviews.

CONSOLIDATION OF HANDSHAKE ACROSS THE NIGER: AN INTERACTIVE SESSION WITH IBA GANI ADAMS AND IGBO/YORUBA CHAMPIONS BEING ORGANIZED BY NZUKO UMUNNA IN PARTNERSHIP WITH CHIEF DELE MOMODU

1. The present-day reality facing our dear country calls for concern.

3. For the above reason the leadership of Nzuko Umunna have confirmed the acceptance of Iba Gani Adams to be engaged in an interactive session with the Intelligentsia community of the Igbo and Yoruba Nations in order to help put to permanent rest all the fears and attempt to separate the Igbo and the Yoruba.

4. The outcome of this will show that there is real deep spiritual connection between the Igbo and the Yoruba

5. It is exciting to announce that the Chairman of Ovation TV, Chief Dele Momodu has accepted to partner with Nzuko Umunna on this project. And this will give the needed visibility to the project which will help to de-escalate the current tension and also deepen the Yoruba/Igbo bond.

6. The zoom conferencing to cover the event will be held on Saturday, 31st October 2020. And we hope to invite young Yoruba and Igbo Rising Stars.