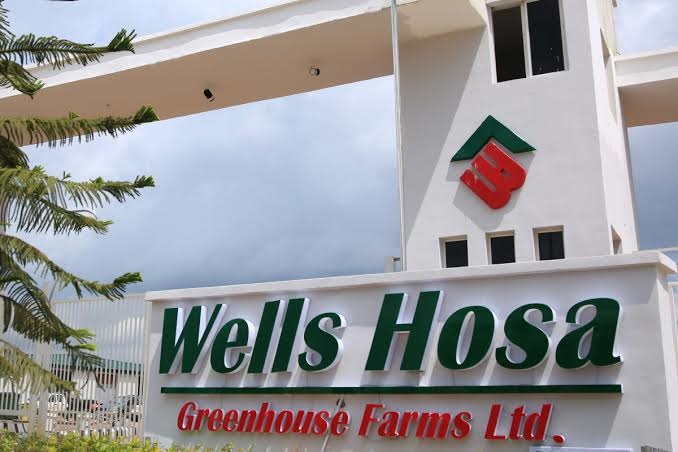 A visit to Wells Hosa Farm, Nigeria pioneers in Green House Farming located in Edo state, hold the potential towards food sufficiency and jobs creation to the teeming unemployed youths.

In an age of continuous change and development with high concern for security, health, the environment and resources, all year round cropping, longer growing season, while still maintaining low cost per square feet with high yields, Nigeria, just as many other nations in the world, might have just found another solution to avert a looming food crisis in the future as predicted by experts.

This is so as greenhouse farming technology does not only provides better alternative for food security but also reduces the risk of clashes between farmers and herders, a situation that has forced Nigerians in their millions out of farming in the last few years, resulting to a drastic drop in the food production and supply chains.

The challenge of food security has remained daunting in Nigeria recent times, especially for government and commercial farmers amid the ever exploding population of the country, farmers and herdsmen clashes resulting in food shortage, poverty and hunger in the country.

To this end, food security, job creation through agriculture as a major policy of diversification, has in the last few years remained in the front burner of the Buhari’s administration, which has continued to dominate most parts of the Government’s Green Alternative policy roadmap.

The Nigerian Government has continued to pledge its readiness to partner with States and other stakeholders in formulating policies and programmes in the agricultural sector to ensure food sustainability but concerns are, apart from poor funding in the sector, insecurity in most farming communities across the country have not only left many in frustration but also forced them out of farming.

However, there are those who have devised alternative means of farming through greenhouse farming technology that is currently gaining grounds in some parts of Nigeria, particularly in Edo State where the technology now serves not only as an alternative to food security but also agro learning centre for prospective agropreneures in the country.

Stakeholders and researchers in the agricultural sector have raised concerned that if urgent steps are not taken by government to end the farmers /herders clashes, Nigerians maybe in for it since most farm lands are either been destroyed by herders and bandits, thereby denying farmers access to it due to illegal occupation.

The growing concern by stakeholders and agro-based investors beyond food production and jobs creation are also the benefit of encouraging farming in an enclosure also called greenhouse farming or hydroponic farming.

A tour to a greenhouse farm in Edo State recently, a pioneer of greenhouse farms in Nigeria key investor in bio-tech, Wells Hosa Greenhouse farm, which holds huge potential in meeting food need of Nigerians. The experience from the investment is one that narrates a success story about Nigeria being a leading food producer in the world if such project is replicated in other parts of the country.

The technology driven farm, which was established four years ago, has grown in lips and bounds and now exports its products to United Kingdom, France, Holland and other countries. This shows that Nigeria has the potentials to feed the world if adequate provisions are given to farmers with policies that encourage investors in the sector.

The greenhouse farms that seat on 27 hectares of land is an initiative of Edo born business mogul and entrepreneur, Capt Hosa Okunbo.

There are also greenhouse farms spread across the country but only a few have lived to see the light of the day due to numerous challenges the average Nigerian farmer is faced with.

In what looks like why farmers cannot do what government must do, farmers must do what they can do to keep their head above water.

President Muhammadu Buhari’s key mandate and effort in developing the agro- sector was aimed to stimulate economic drive in the country is however confronted with some challenges by investors aside the farmers herders clashes.

Experts have averred that greenhouse farming is the best alternative to food export given the conditions under which crops in greenhouse are tend to. They have also seen it as another solution to end some of the crises between farmers and nomadic in the last few years.

According to the General Manager, Bright Okunbo represented by the Deputy Managing Director, Mr Jose Lugo, opined that replicating greenhouse farming is the way to go and added that hydroponic farming hold huge economic potentials for the country and capable of meeting the food need of Nigerians with the right technology.

“When people talk about replicating greenhouses it goes beyond to buy or acquire it but to have the technological know-how. You need to get the right green houses, designs, right component and the technology. The technology we are applying here is not the same you will apply in places like Abuja; you need to do the adjustment according to the site”.

“This is the most important aspect of it. For me, bio-technology is the future of Nigeria. Our chairman is interested also in building the technology in Nigeria by also training engineers for the future”.

Lugo also expressed confidence that Mexico model and success in green house is possible in Nigeria even as his hailed the initiative of the chairman, Hosa Okunbo for being the pioneer in green house farm in Nigeria.

“You see, 20 years ago in Mexico, we started to build greenhouse farms like what we have in Wells farms. As at that time, we had about 2,000 hectares in the country. Twenty years later Mexico has more than 50, 000 hectares but today is a complete different story; instead of exporting oil it now exports food to other countries of the world.”

“So coming here to Edo state is like iam starting all over again however despite the climate we are getting results we can do it in other places successfully with the right technology”.

On his part, the Business Development and Marketing Manager of the farm, Mr Clement Albert Umoru, however noted that some of teething problems confronting greenhouse farms in Nigeria is the difficulty in procuring soluble fertilizers owing to the ban placed on it by the federal government and however appealed to the relevant authorities to come to the aids of hydroponic farmers.

“As at last year, we were accredited and certified to export our products, basically Habenero pepper, we have the red, yellow and the orange. This business was set up to make money and as you know we are pioneers in the business. Now, we are just working on implementing our 2020 calendar and as you can see we are expanding and clearing some greenhouses so that we can plant some good products.

“Our products are already in the UK, Holland and France and we would get to the stage where we can get our products round the world and compete with people started who started planting it and that is the focus

Every business has it’s up and down. For a hydroponic farm of this nature our biggest challenge is actually acquiring soluble fertilizers. We want to use the medium to appeal government to ease the legislation on the ban on fertilizers in Nigeria because if we must go far on this bio-tech agriculture we need soluble fertilizers for this kind of farming.

No doubt, the future of this country is fully agriculture because we have not tapped up to 10% of the potential in agriculture in the country. We also want to see how we make the name and bring other people on board so we can replicate the same in the state and other people can join.

In term of replication “Other states and private sectors come to see if can they replicate this but of course you know everything involves money. We need to maximize what we have here first. So when we see people commit money into it to show your seriousness for partnership. We have had some states show interest but when they hear about the cost implication of doing full hydroponic they step out but the interest on return is very high.

I honestly think it is the way to go. The greenhouse technology in an enclose environment prevent intruders to come in and eat up your crops or the kind of issues we have in open field agriculture. Yes, if government decide to enter this kind of business the country will be better for it.

The biggest advantage in green house farming lies in the potentials to utilize space. For example, if you need 100 hectares for cattle and you use the same land for crops on greenhouse it show you the can get the full potential and capacity of what you planted. If few states invest in this it can feed the entire country