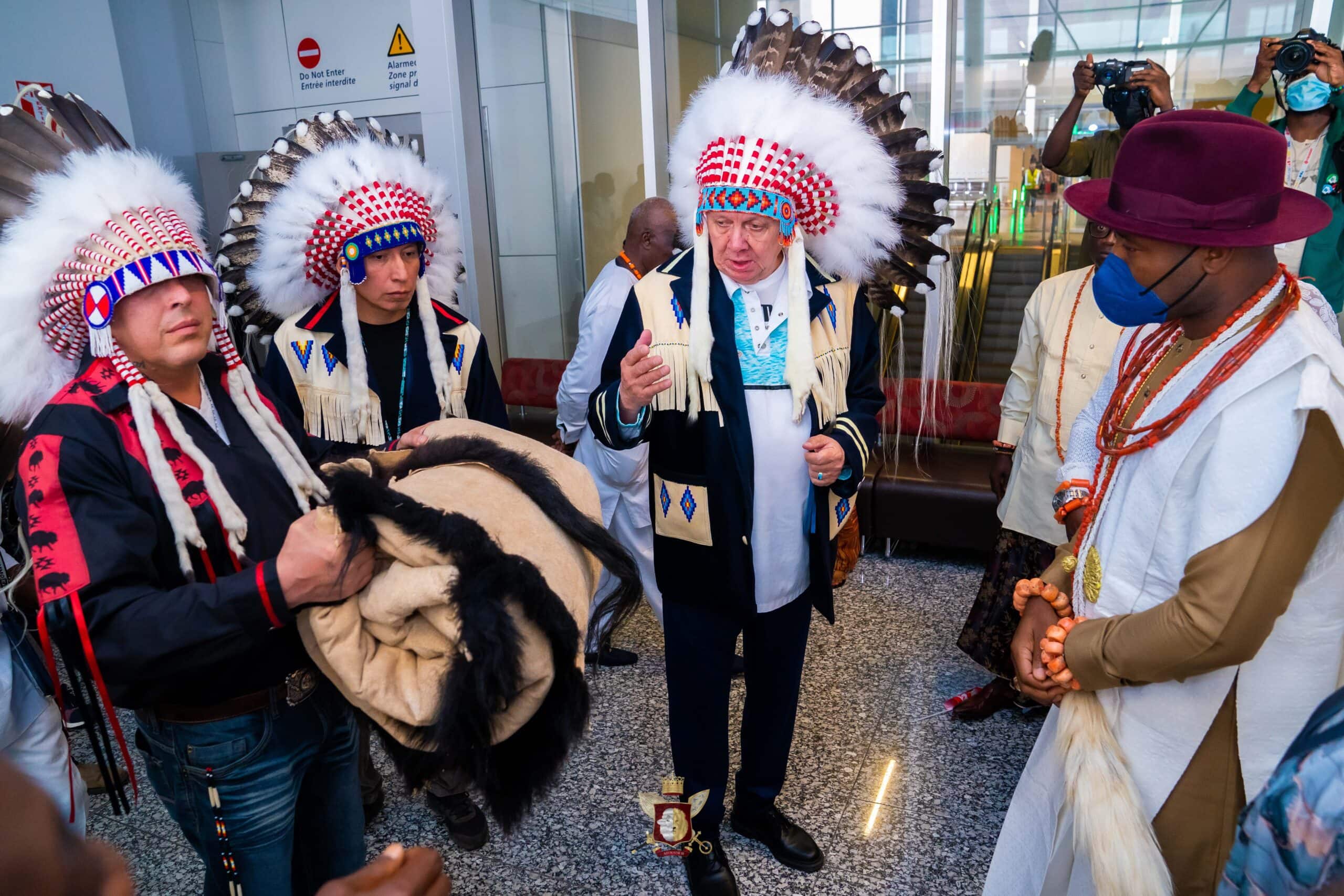 In bid to foster and promote Tribe to Tribe cultural heritage, the Tsuut ‘ina Nation in Canada Wednesday at a colourful ceremony welcomed the revered Olu of Warri Kingdom, His Majesty, Ogiame Atuwatse III to Canada as he commenced his 6 days investment drive visit to the Country.

The Tsuut’ ina Dancers, drummers and Chiefs in their full regalia also joined at reception ceremony organized for the historic visit of his Majesty Ogiame Atuwatse III and Her Highness Olori Atuwatse III with members of His Chiefs and entourage at Calgary airport, Canada. 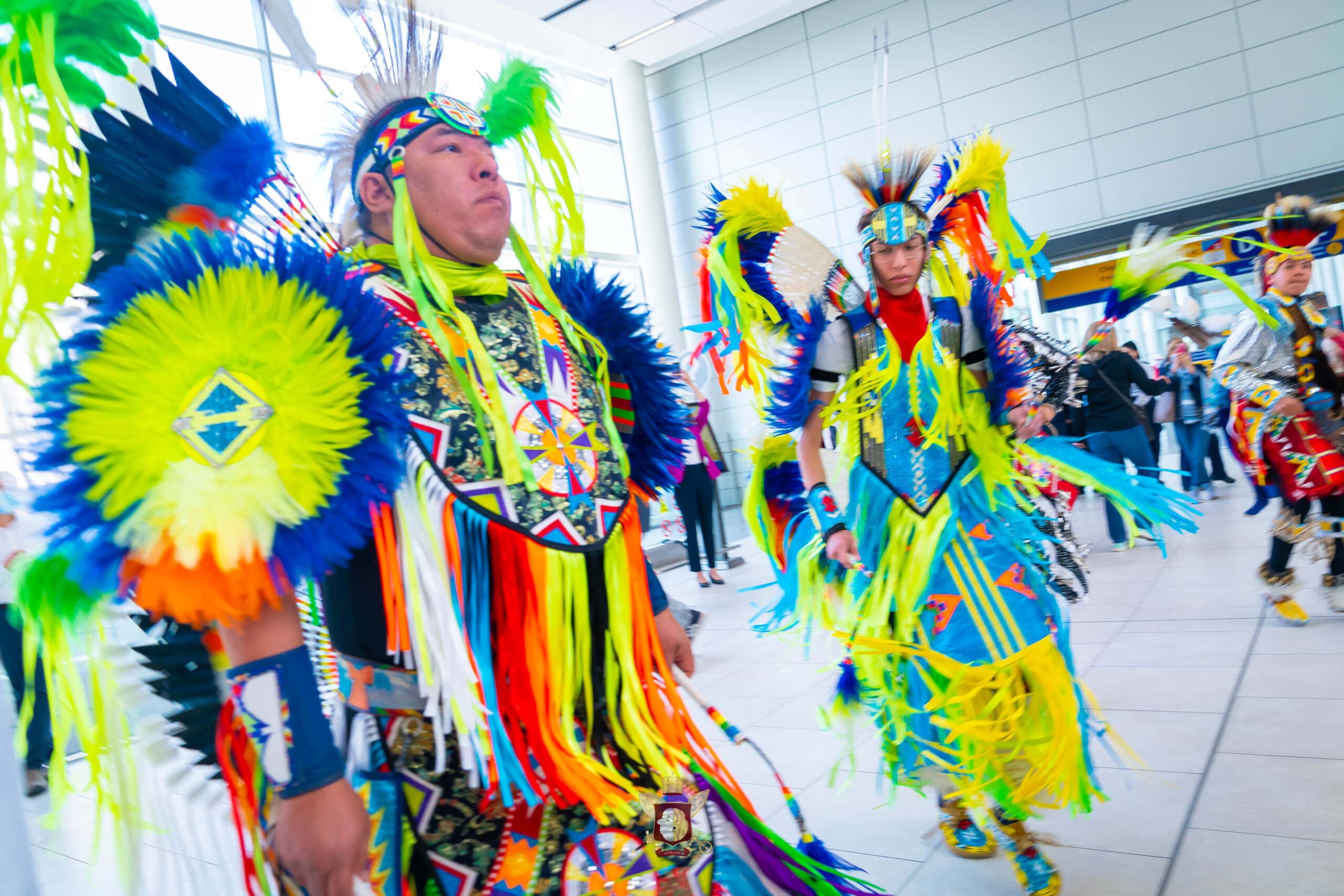 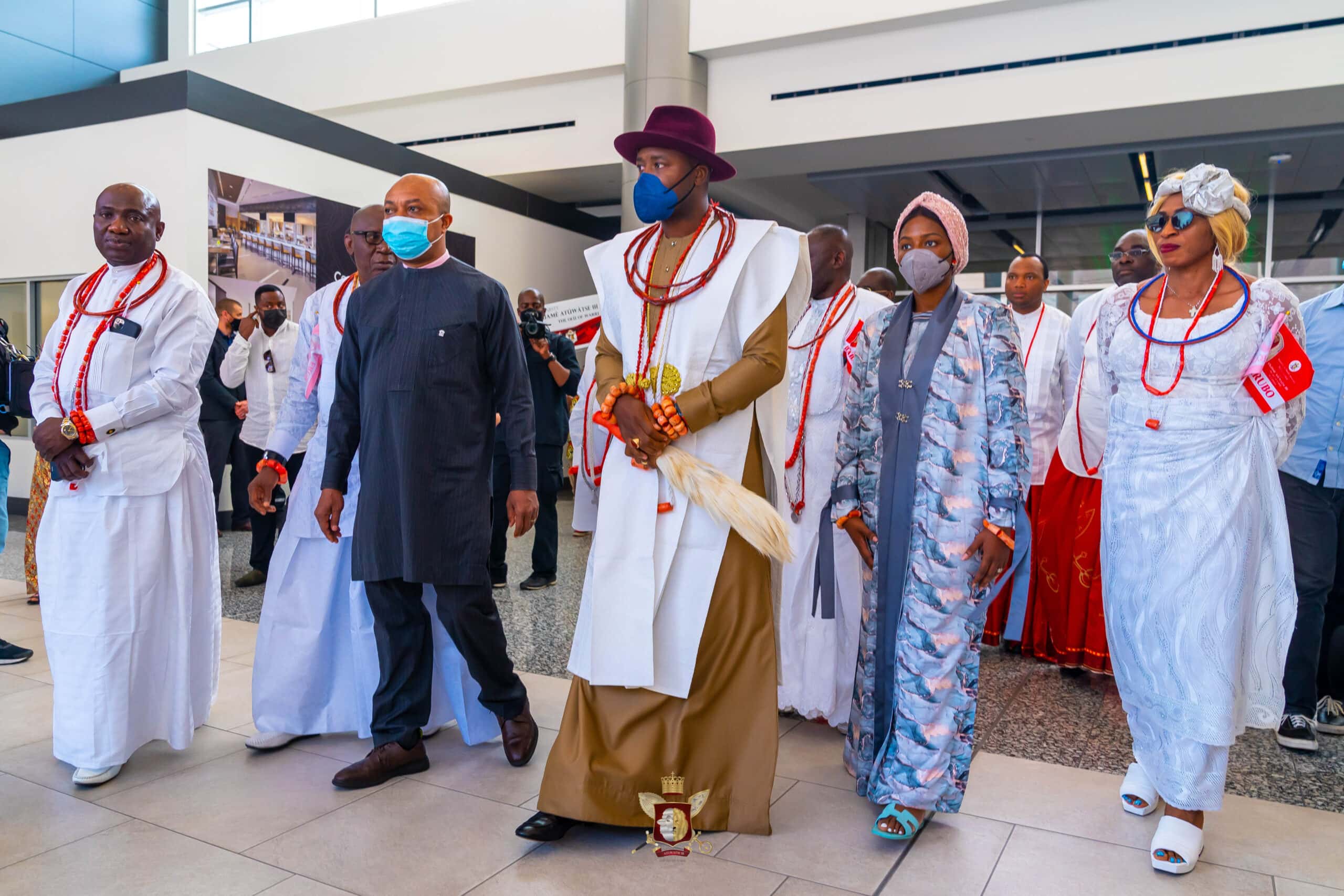 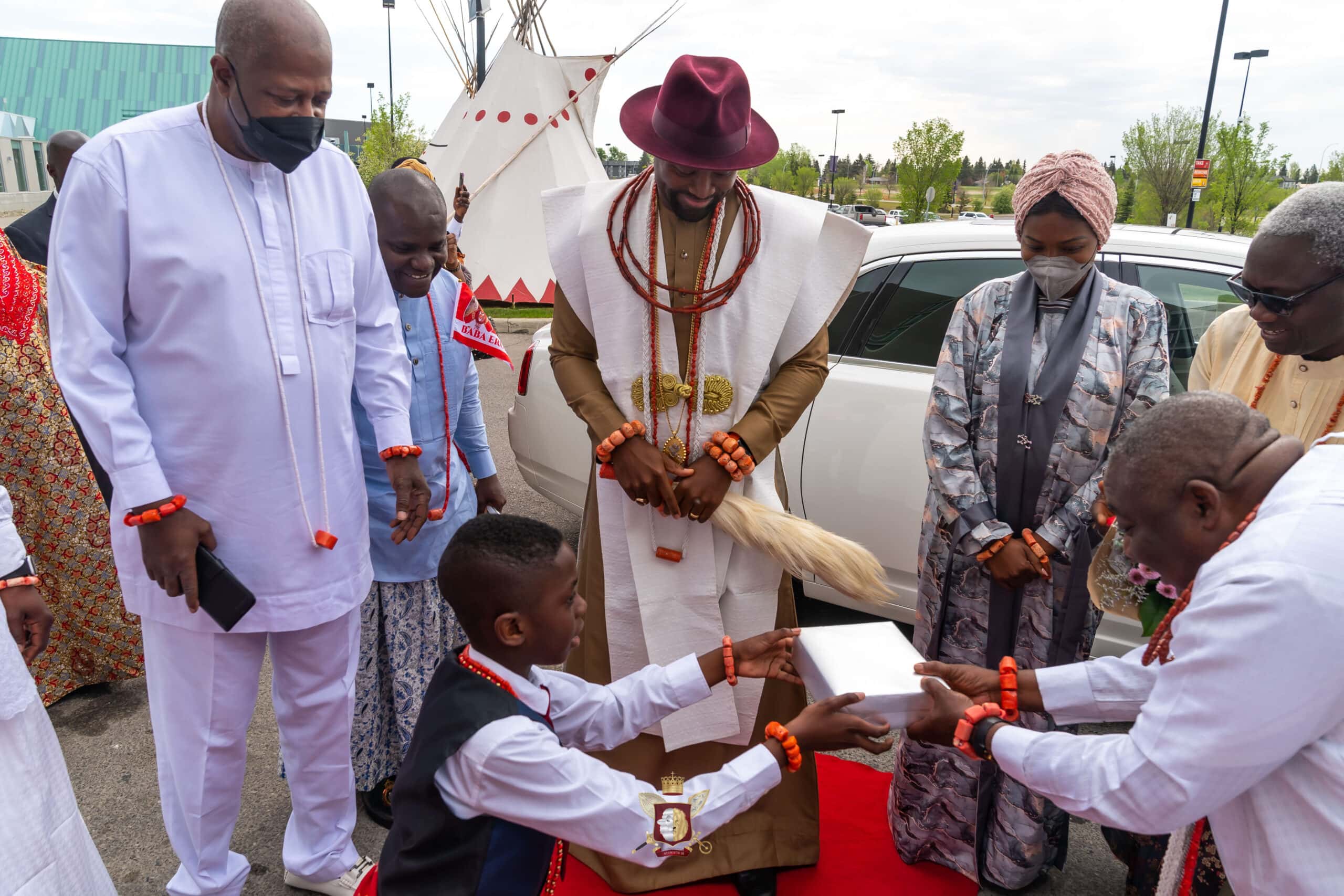 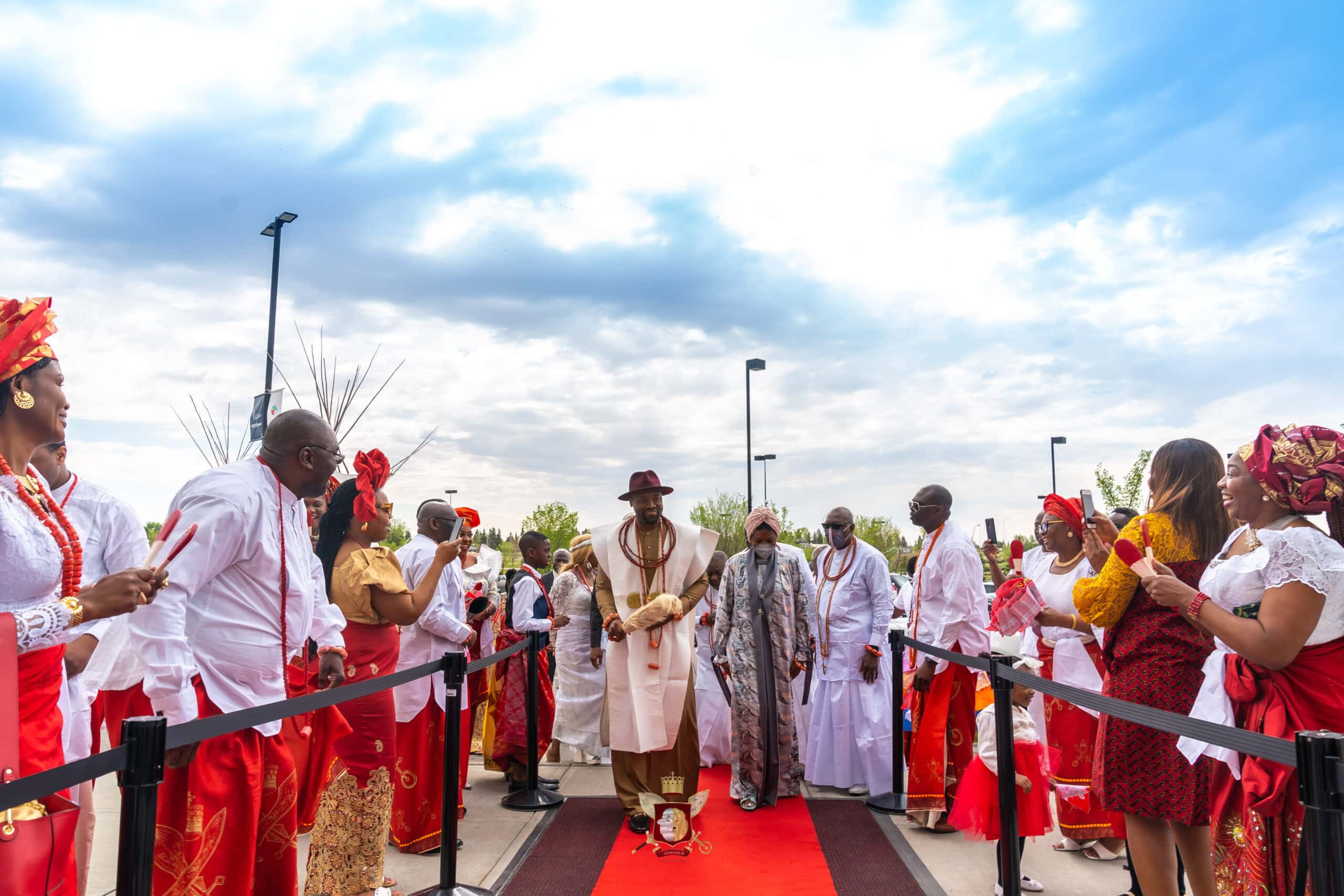 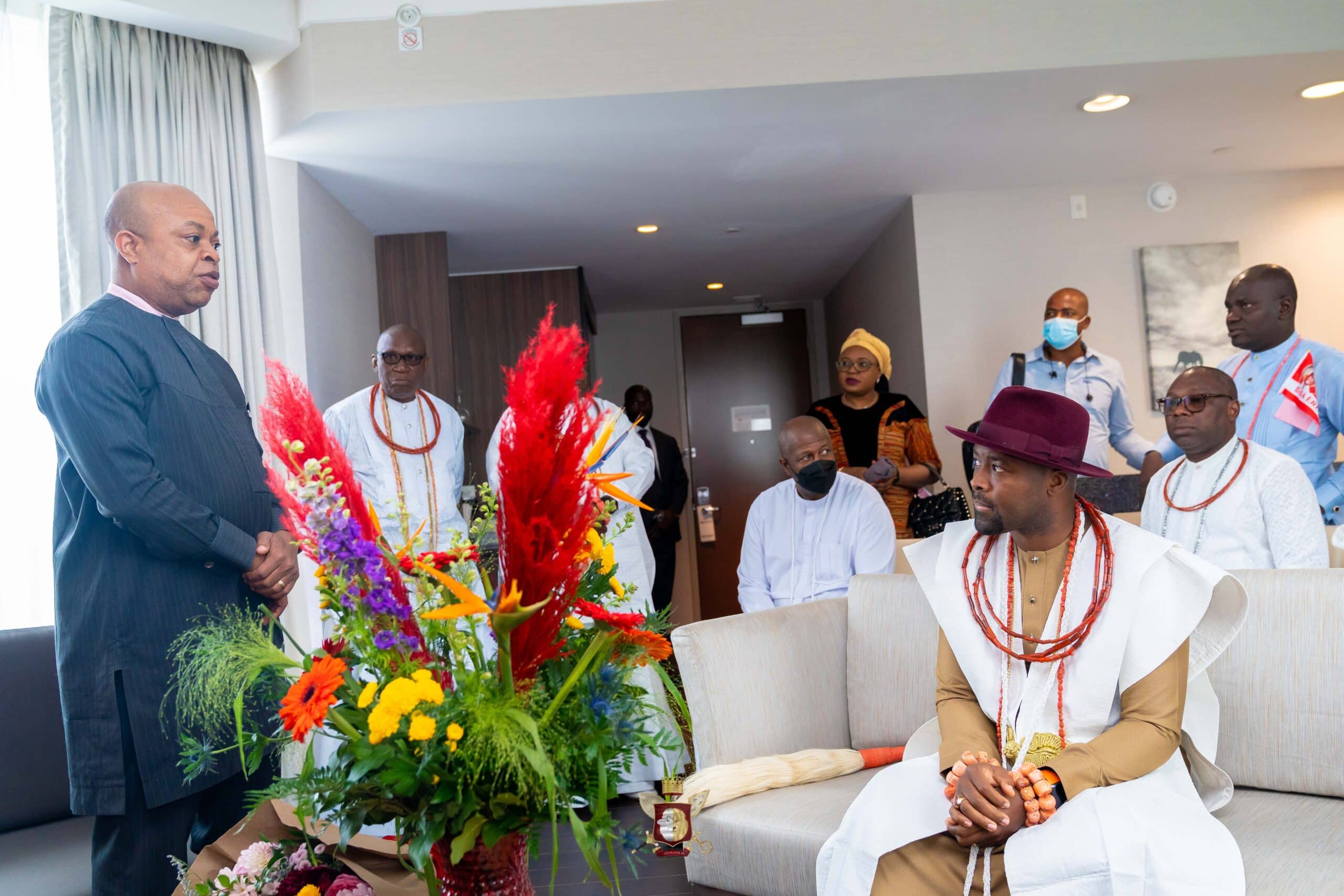 Also, the Itsekiri community in Calgary Canada had lined up at Grey Eagle Resort and Casino in Calgary, beautifully dressed in Itsekiri attire poured royal accolades as Olu commenced his official visit to Canada attract direct foreign investment to Warri Kingdom and exchange of cultural heritage with Tsuut’ ina Nation in Calgary.

Simba Creative film crew were on ground to document the welcome ceremony and cultural display which would be part of the documentary that would be broadcast on National and international television stations.

The Tsuutʼina Nation is a First Nation band government in Alberta, Canada. Their territory today is confined to the Tsuut’ina 145 reserve, whose east side is adjacent to the southwest city limits of Calgary.

Their traditional territory spans a much larger area in southern Alberta while the Kingdom Of Warri or Iwere Kingdom, established in 1480, was part of the Nigerian traditional states based in the city of Warri in Delta State, Nigeria.

The current Olu of Warri is Ogiame Atuwatse III, who was crowned on 21 August 2021 among his agenda for his subjects is to attract direct foreign investment to Warri Kingdom hence his official visit to Calgary and Brampton in Canada.

All these events were made possible by the Executive Program Coordinator, OZ Consulting firm, Ms Abi Goodman, who has worked with various stakeholders in Canada to make sure everything goes as planned.

According to a statement released by the Media PR ifetayo Adeniyi Moses also stated that “Today indeed remains indelible for these great communities and various stakeholders as Olu of Warri is set to meet the Business community in the heart of Calgary tomorrow 2nd June 2022”.

A Better Society Is Possible