A Special Birthday Tribute to Chief Gabriel Osawaru Igbinedion ,CON:An Enigma Like No Other 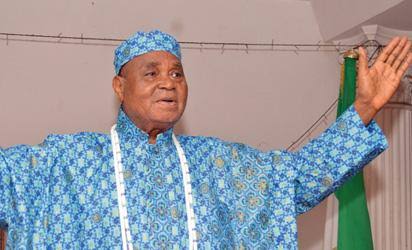 The aphorism above aptly captures the persona of Chief Gabriel Osawaru Igbinedion ,CON, the Esama of Benin Kingdom ,the Honorary Consul of the Romanian Government to Edo and Delta States and the Chairman of the Okada Group of Companies.

It was Winston Churchill former British Prime Minister that said :

So , for the Esama of Benin Kingdom ,giving is not just a habit ,it is certainly a hobby , because the Esama is a giver by nature .It is said that givers give not just because they have , but because it is in their nature to give .

No one would remember the Good Samaritan if he’d only had good intentions; he had money, too

This takes us to another aspect of the life of Chief Gabriel Osawaru Igbinedion -wealth attained by a dint of hard work ,character and consistency .It is not getting wealthy that is the issue ,it is staying wealthy all through your life time .Chief Igbinedion has come to be a man for all seasons ,blossoming year after year ,transcending many generations , yet still relevant and strong .It is in recognition of the Esama’s positive influence in Nigeria , that the Federal Government of Nigeria , vested him with the Prestigious and Distinctive Rank of a Commander of the Order of the Niger (CON).

It was Zick Ziglar that said :

You might think money is not important ,but I tell you ,it ranks reasonably close to oxygen

And so , Chief Gabriel Osawaru Igbinedion has given bite to the life of many by his many random acts of kindness and pure benevolence.A silent benefactor to many Institutions, Persons and Charities , within and outside Nigeria ,the Esama has come to be in the realm of an Institution himself ,that remains a strong pillar of Societies all around the World.

The Esama is an Astute Business Man and International Investor with interests in diverse areas of the World Economy .One thing however stands the Esama Out in his Business Trajectory .It is the domestication of a part of his Investments in Edo State , Nigeria,the land of his birth ,thereby providing veritable employments to teeming Edo Youth , aside the massive infrastructure attributable to the Esama , that adorn the skylines of exquisite locations in Benin City and other places in Edo State and beyond . But when it comes to the Esama ,what you don’t see is far more than what you see.

As a friend of mine said :

The Esama is a light to Society.A Man who pioneers many things in Edo State and Nigeria at large , definitely has the State and Country at heart

Happy Birthday to you the Esama of Benin Kingdom .You are indeed a rare gem and an Avatar.
87 Hearty Cheers to you sir ,the numbers “7” symbolises perfection ,while the number “8” symbolises a new beginning.We wish you sir long life and Prosperity in good health of gargantuan bliss .There are indeed still greater years ahead .

Douglas Ogbankwa a Benin Based Lawyer , is the President of the Benin Writers’ Society.