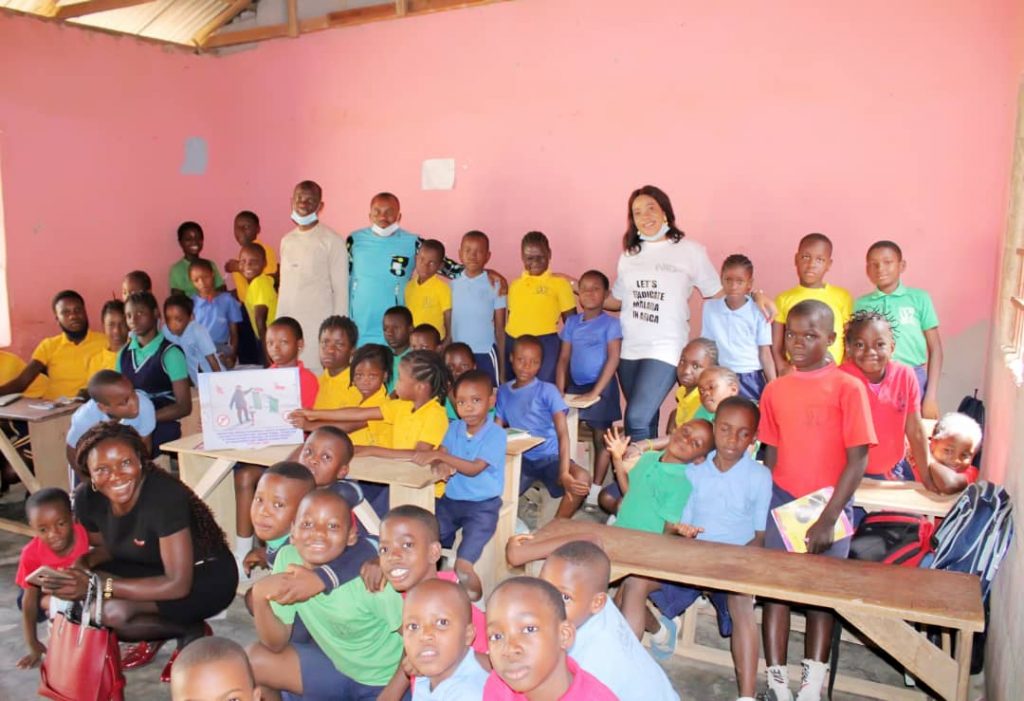 Members of the Ned Nwoko Foundation today began its first phase in the fight against Malaria with a visit to some schools in Abuja Metropolis. The schools visited included Saint Theresa School and El-Semvico International School, Mpape.

The team which was led by Adeniyi Ifetayo the Media and Publicity officer to the Antarctica Explorer and foremost Philanthropist, Prince Ned Nwoko, had as part of his team, the Welfare and Logistics Manager, Nora Okolo and Health and Environmental officer, Sonia Somuvie who were among the facilitators for the advocacy Program.

Addressing the students present, the team leader Mr Ifetayo described the sensitisation exercise as the first phase in enlightening the grassroots about the causes of Malaria and how as individuals and families could encourage cleanliness of their environment as a tool in reducing the breeding of agents of Malaria which is the Female (Anopheles) Mosquito.

He further shared with the students and pupils of the schools visited the sacrifices of Prince Ned Nwoko and his ordeal as the first black African to visit the South Pole in Antarctica to raise awareness on the scourge of malaria in Africa and strategies to eradicate malaria in Africa. ” The Journey to Antarctica was different, it wasn’t for sight seeing, it was a visit to learn from those who had been able to conquer the scourge of Malaria, and how we could apply it here, there are many vaccines for different illnesses but it is surprising to note that we have none for Malaria, because it is mainly an African Problem, and there would be no better people to find the cure, more than Africans themselves who have been victims of the scourge” he said.

Miss Nora Okolo and Sonia Somuvie also part of the team engaged the pupils in a discussion where they were able to identify the life stages of a Mosquito before it gets to adulthood, the strategies of Ned Nwoko Malaria Eradication Project. It was an interactive session with the pupils of El-Semvico International School, and were able to find ways they could destroy breeding grounds of mosquitoes as one of the major ways of preventing Malaria. The pupils during the discussion suggested cleaning of their environment and clearing of all drains and bushes as necessary steps to be taken serious if there was ever going to be a stop to Malaria.

Following the conclusion of the advocacy program in the schools, the kids were led by members of the Prince Ned Nwoko Foundation team to take the pledge which would see them as advocates for a malaria free Nigeria and Africa as well as Volunteers for the Eradication of malaria project.