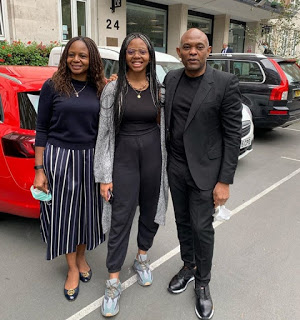 If Tony Elumelu, the head honcho of Heirs Holding, were to pen down a memoir on his sojourn in life, apart from being a successful business man, one of the highlights would definitely be marrying Dr Awele Elumelu and birth of his beautiful children. Tony never jokes with his family. His schedules are quite tight and his travel itinerary/globetrotting quite broad, he always creates time out of no time to play his fatherly role.

Tony and Awele’s close to 2 decade nuptial union, showed observers and admirers that, it takes more than love to make marriage blissful and flourish. They both have exhibited resilient, doggedness, truthfulness, sincerity of purpose, fear of God as tenents in which their marriage is built on. This is a strong factor which has kept their marriage waxing stronger.

It’s the joy of every parent that their offspring surpasses their achievements in life. Both Tony and Dr Awele are proud parent as their eldest daughter, Ogechi Elumelu, who graduated from St. Catherine Bramley School, UK, is currently followng the footstep of her father to actualise her dream of being a seasoned economist and financial expert. Highly cerebral Ogechi during her leisure, spends more time in her fathers UBA office, learning the rudiments and concepts of modern banking system as an intern. She recently got admitted into the London Business School, where she would be baging a Bachelor’s Degree in Economics, a discipline which has been her choice of career path. Emotional Tony and Dr Awele could not hold their joy as they escorted Ogechi to school for resumption.

For Tony’s contribution to Business, Philanthropy and Growth of entrepreneurial excellence in Africa, raising over 100,000 new generation of entrepreneurial giant, through his Tony Elumelu Foundation, Elumelu was announced as Times 2020, ‘100 Most Influential People in the World’. Coming at a time when, Tony helped galvanized the private sector to engage in the work of Nation building, mentoring, engaging and lifting Africans who can bring about the change Africa needs in tech, agriculture, retail, fashion, health care among other areas.